CHINA Motorcyclist refuses to believe man in swimwear is a policeman

Motorcyclist refuses to believe man in swimwear is a policeman 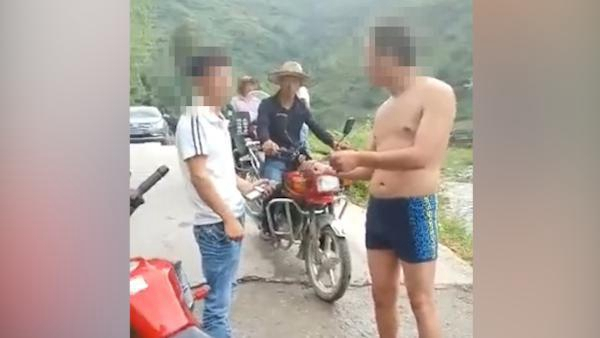 A police station in southwestern China has confirmed on social media that one of its police officers was actually on a plainclothes mission when he was filmed cautioning a motorcyclist while in swim shorts.

In the viral video, the policeman stopped the motorcyclist for riding without a helmet in Guizhou Province. However, the rider did not believe him was a cop because of his attire. So he was asked where his uniform was.

The officer then produced his ID and asked the motorcyclist to hand over his license. But he continued to question the bare-chested officer as to whether he was on duty or not.

The motorcyclist even was heard to ask the officer whether he dared to hand out a fine, although the rider was allowed to continue on his way after calling a relative to bring him a helmet.

The video which appeared to have been filmed by a woman who sat on the back of the motorcycle, sparked controversy on social media. Some people are in favor of the policeman, thinking he is dedicated because he still enforced the law when he was on holiday. Others insist that the police officer did not obey the rules in doing so.

The local police station released a statement confirming that the police officer, whose surname is Shui, was not on holiday, but was on a plainclothes mission when he stopped the motorcyclist.

The statement said Shui was investigating illegal fishing in the river at that time.

“We have received several reports that there are always people fishing illegally by electric shock and net in the river, so our police officers disguised as swimmers to catch these people," The statement said said. "During the investigation, Shui found the unsafe driving of the motorcyclist, so he stopped the rider. It is legal for Shui to perform duties to stop dangerous driving.”

After letting the motorcyclist go, Shui stayed in the area with his colleagues until midnight, finally arresting three suspects for illegal fishing.

“I did not want to fine the motorcyclist, I just wanted to ensure his safety by wearing a helmet,” Shui told West China Metropolis Daily.