GENEVA, Jan 30 (Xinhua) -- Chinese President Xi Jinping's speech and his pledge on multilateral cooperation set the tone for the World Economic Forum (WEF) Virtual Event of the Davos Agenda held on January 25-29 as topics such as climate actions and making COVID-19 vaccines a "common good" dominated the debates. 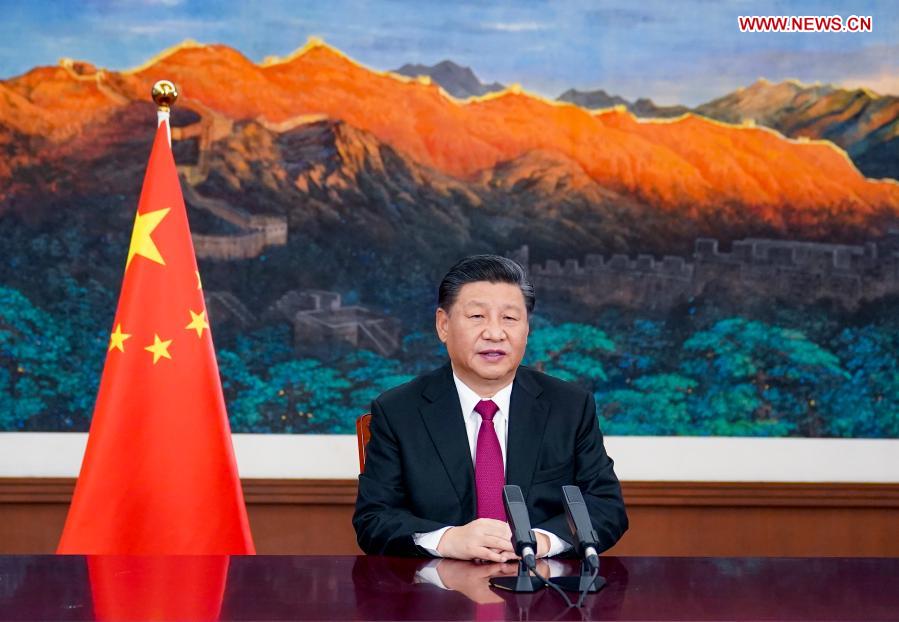 Xi attends the WEF Virtual Event of the Davos Agenda and delivers a special address via video link in Beijing, capital of China, Jan 25, 2021. (Photo: Xinhua)

World leaders were united in their call for more collaboration and trust rebuilding as more than 2,000 heads of state and government, and leaders in business, academia and civil society joined the meeting themed "A Crucial Year to Rebuild Trust."

In his special address on Monday, Xi called for the world to work together to tackle global challenges, particularly the still ravaging COVID-19 pandemic and climate change.

Highlighting the importance of the principles of multilateralism, Xi said, "the problems facing the world are intricate and complex. The way out of them is through upholding multilateralism and building a community with a shared future for mankind."

"The pandemic is far from over. The recent resurgence in COVID cases reminds us that we must carry on the fight," he said. "There is no doubt that humanity will prevail over the virus and emerge even stronger from this disaster."

His call came as the International Monetary Fund this week raised its forecast for global economic growth to 5.5 percent in 2021, 0.3 percentage point higher than the previous forecast, but warned that the world economy continued to face "exceptional uncertainty".

Antonio Guterres, the United Nations secretary-general, who also spoke on the opening day of the Davos Agenda, reiterated the need for a "reinvigorated, inclusive and networked multilateralism," and a "full, inclusive and equal participation for developing countries in global institutions."

German Chancellor Angela Merkel joined this pledge on Tuesday, saying "this is the hour of multilateralism" and that the World Trade Organization and fair international trade are a cornerstone for more international cooperation.

Warning of the possibility of conflicts caused by modern-day challenges, Russian President Vladimir Putin said, "all of this cannot but impact on international relations, making them less stable and less predictable."

"Despite differences and challenges, it is essential that we keep looking positively into the future and remain committed to the constructive agenda," Putin said.

As the global number of coronavirus cases surpassed 100 million this week, European Commission President Ursula von der Leyen on Tuesday focused her address on the urgency to make the vaccines a "common good."

"Europe invested billions to help develop the world's first COVID-19 vaccines, to create a truly common good," she said, urging pharmaceutical companies and vaccine manufacturers to live up to their delivery promises.

Indian Prime Minister Narendra Modi said his country is making progress in combating the COVID-19 and promised to step up the development and manufacturing of vaccines made in India.

"So far, only two made-in-India corona vaccines have been introduced to the world. In the near future, many more such vaccines will be made available from India. These vaccines will help us in assisting countries across the world faster and on a much bigger scale," he said.

He made the remarks as COVAX, the global initiative led by the World Health Organization, strives to ensure rapid and equitable access to COVID-19 vaccines for developing and developed countries alike.

French President Emmanuel Macron said that climate challenge is a top priority, expressing his hope that the 2021 UN Climate Change Conference, also known as COP26, to be held in Britain in November, will help protect biodiversity.

Cyril Ramaphosa, president of South Africa, said, "the task is not to return the world to where it was when the pandemic struck, but to forge a new path and a new design."

During the week, the WEF, the Energy Transitions Commission think tank based in London, U.S. independent organization Rocky Mountain Institute, and the We Mean Business, a global coalition working with influential businesses for climate action, launched the Mission Possible Partnership in a bid to accelerate the decarbonization of heavy industry and transport.

The conclusions from the Davos Agenda week will feed into task forces working on global issues for its upcoming Special Annual Meeting in Singapore in May, the forum said before the virtual gathering, adding that the high-profile annual summit is expected to return to the Swiss ski resort of Davos in 2022.