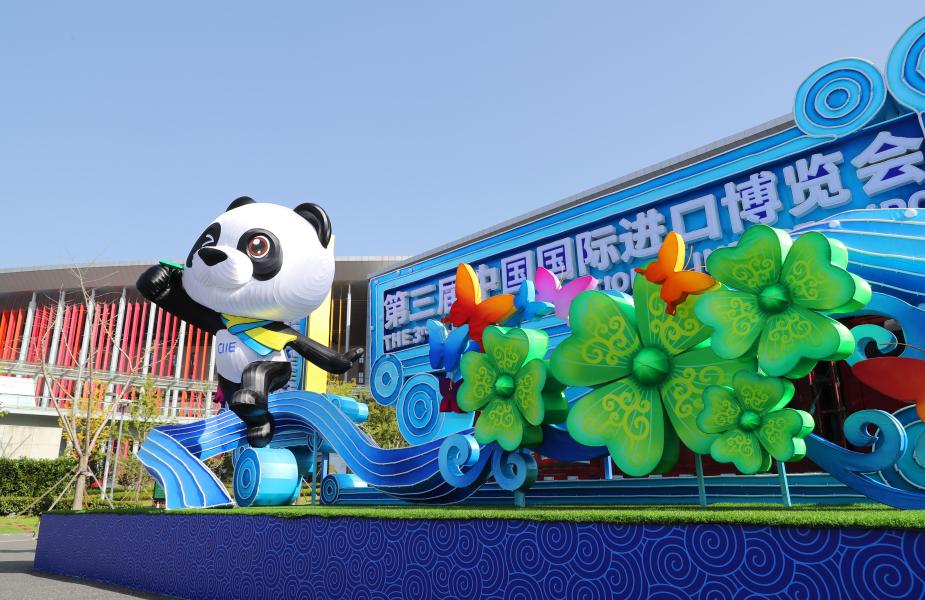 Photo shows decorations at the west entrance of the National Exhibition and Convention Center (Shanghai) in East China's Shanghai, on Oct 23, 2020. [Photo/Xinhua]

SHANGHAI, Nov. 3 (Xinhua) -- The highly anticipated third China International Import Expo (CIIE) will be held in the coastal city of Shanghai from Nov. 5-10 as scheduled.

Flocking to this year's CIIE are returnees from past expos as well as new faces, including nearly 50 Fortune 500 and industry-leading companies, signaling a vote of confidence in China's further opening-up.

For these 2,600-odd global exhibitors, as well as some 400,000 participants at the event, this year's expo provides an opportunity to explore China's economic vitality and learn more about its new development blueprint. The expo promises to inject fresh impetus into a global economy crippled by the COVID-19 pandemic.

As the pandemic continues to disrupt economic activities worldwide, the International Monetary Fund (IMF) predicted a global economic contraction of 4.4 percent for 2020, and the World Trade Organization said world merchandise trade is expected to fall by 9.2 percent this year.

Facing "the worst crisis since the Great Depression" as the IMF described, China has managed to restore its economy while containing the epidemic, becoming the first major economy to achieve growth since COVID-19 crippled the world economy.

"Big winds and storms may upset a pond, but never an ocean," said Chinese President Xi Jinping at the opening ceremony of the first CIIE in 2018, comparing the Chinese economy to an ocean. His words still resonate today.

In fact, China's rapid economic recovery amid the pandemic has not only proved its own economic resilience, but also served as a beacon of hope for the whole world, providing fresh business opportunities for global enterprises, small- and medium-sized in particular, via such platforms as the CIIE.

Clementine Mwaba, a Zambian trader in honey business, said as Zambia's huge produce yearns for more overseas markets, the CIIE provides a platform for securing one.

"The upcoming international import expo in China works to provide the space and opportunities for more markets for us," Mwaba said.

"China is a growing market for our products, which have been very well-received by the Chinese population so far," she said, adding that her country expects to double its sales of lobsters to China by the end of this year.

For Kenji Mizuta, president of the Japan External Trade Organization's Shanghai Representative Office, the third CIIE will be the largest event his organization has ever attended this year.

"China offers huge opportunities for countries across the world with a huge market and strong purchasing power," Mizuta said.

"I attended both (previous expos) and the two were a fantastic success, and we expect the third edition to be also a great success," said Jean-Paul Agon, CEO of international cosmetic company L'Oreal.

"We need to 'join hands' with each other instead of 'letting go' of each other's hands. We need to 'tear down walls,' not to 'erect walls,'" Xi addressed the opening ceremony of the second CIIE last year, calling for jointly building an open world economy through cooperation, with innovation and for mutual benefits.

Responding to such a call, which holds greater significance amid the rising sentiment of protectionism and unilateralism, China, which has achieved a development miracle over the past 40 years through reform and opening up, has embarked on a new journey of further promoting global win-win cooperation through greater connectivity and inclusiveness.

China-Europe freight trains within the framework of the Belt and Road Initiative serve as one living example of such cooperation. In the first half of 2020, China-Europe freight trips rose 36 percent year-on-year to 5,122, transporting 3.67 million pieces and 27,000 tons of anti-pandemic materials to European countries.

And the annual CIIE is another key symbol of the openness Xi has called for, a platform which Shane Tedjarati, senior executive from U.S. industrial conglomerate Honeywell, deemed "terrific" and "important."

"It's the one time when both Chinese and Western companies can come together, showcase their innovation, provide their lessons learned and make more connectivity," Tedjarati noted.

Despite the pandemic, the CIIE is drawing exhibitors in droves, who are assembling to vote for China's proposal for win-win cooperation, and honor and defend multilateralism. With an expanded exhibition area of 360,000 square meters, the number of top enterprises scheduled to participate in this year's expo has surpassed that in the previous years, according to Vice Director of the CIIE Bureau Sun Chenghai.

"The globalized world requires that all players be interconnected. Trade is part of that interconnection," noted Jose Antonio Camposano, president of Ecuador's National Chamber of Aquaculture.

"The CIIE provides a platform for foreign companies to share the benefit of China's development. We also hope to share the benefits from our agarwood with Chinese consumers in the same spirit," said Nicklaus Ho, CEO of Malaysian company Gaharu Tea Valley Gopeng.

"In a year when there is this (COVID-19) crisis, when globalization is challenged, I think the best possible signal is exactly to organize this CIIE," said Agon from L'Oreal, who first visited China in 1997.

The event "shows China's determination to play a significant role in fuelling global development with openness and a spirit of mutual benefits," he said.

From public health and epidemic prevention, energy conservation, environment protection, to smart transportation, this year's CIIE will surprise visitors with international debuts of hundreds of new products, technologies and services.

L'Oreal, for instance, will present over 100 new blockbuster products and various cutting-edge tech innovations for beauty. Some 25 new products by Nestle, one of the world's largest food and beverage companies, will make their debut. Over 300 pharmaceutical companies have been scrambling for booths to showcase their new products and public health solutions.

Besides, new non-contact means such as cloud signing have been introduced to accelerate preparations for the expo.

The third CIIE "represents a reference point with regard to innovation -- new technologies and systems to implement the digital aspect in real life," said Marco Bettin, secretary general of the Italy-China Chamber of Commerce.

Meanwhile, foreign companies will also find this year's expo a haven for newness.

Based on the changes in its development conditions and demands for a long-term high-quality growth, China has started to adopt a new development pattern of "dual circulation" where domestic and foreign markets can boost each other, with the domestic market as the mainstay.

"Making the domestic market the mainstay does not mean we are developing our economy with the door closed," Xi told a symposium of entrepreneurs in July, adding, by giving full play to the potential of the domestic market, both domestic and foreign markets can be better connected and utilized to realize robust and sustainable development.

Now, with the third CIIE, global enterprises cannot wait to eye new opportunities brought by the dynamic of this "dual circulation."

Masahiko Uotani, president and group CEO of Japanese beauty company Shiseido, which is an old friend of the CIIE and has decided to attend the expo in the next three years, believes China's new development pattern "is undoubtedly a good thing," which can push for greater global development through information exchanges and mutual learning between China's domestic market and overseas markets.

Echoing Uotani, Frankie Ng, CEO of Swiss multinational company SGS, noted that the third CIIE "is a perfect example of bringing in the latest technologies and best products from global markets to support the development needs of the domestic market."

"The fair is important for those who want the gates of trade between their country and China to open much more," noted Camposano.