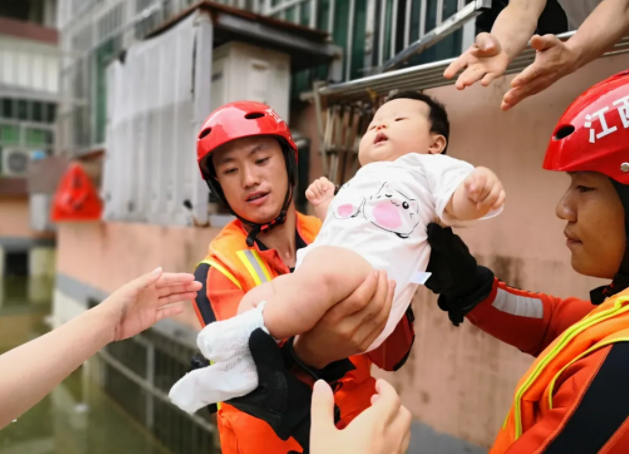 The emergency response for flood control was upgraded to the highest level in multiple regions of southern China, where continuous torrential rainfall has caused widespread floods. Local authorities spared no efforts to organize rescue and relief work to minimize casualties and property losses in a timely manner. The front door of a flood-affected resident's house in Xuancheng City, east China’s Anhui Province was blocked by branches and other debris and could not be opened. Without saying a word, a firefighter plunged into the sewage to clean up the sundries. On July 7, heavy rainfall caused severe waterlogging in Xiejiatan Township, Poyang County, east China’s Jiangxi Province, with a water depth of up to three meters. Firefighter Wei Maokang let an elderly man with limited mobility ride on his shoulder when transferring him to safety.

On July 9, 149 children and more than 10 teachers were trapped in a kindergarten due to the flood occurred in Kecheng District, Quzhou City, east China’s Zhejiang Province. Under a dangerous situation where the water level is still rising, two trucks and 10 firefighters from the local fire and rescue team were mobilized to the kindergarten to participate in the rescue work. The firefighters held the children in their arms and comforted them. All trapped teachers and students were safely transferred within about two hours.