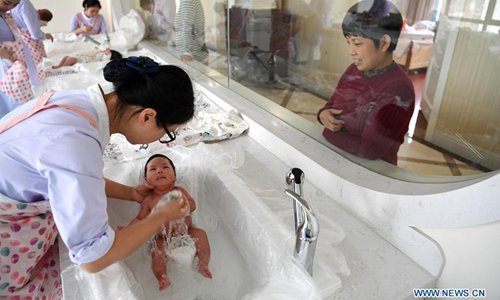 China's aging population has turned into such a big concern that several lawmakers and political advisors feel it is imperative to further relax the family planning policy by allowing Chinese couples to have a third child, and Chinese society is paying close attention as to whether the population policy will see some "changes" in this year's two sessions.

Huang Xihua, a deputy to the National People's Congress (NPC) from South China's Guangdong Province, continued to call on the country to relax the family planning policy and reduce the burden for families in terms of taxes, education, medical care and employment.

"We hope that Chinese families are willing to give birth to more children and can also afford to raise them," Huang told the Global Times.

"China could consider implementing the third-child policy and a pilot policy can be launched in Guangdong Province," Zhu Lieyu, an NPC deputy who is a lawyer from the Guoding Law Firm in Guangdong, told the Global Times.

"Guangdong is a province with a vibrant economy, and rich educational and medical resources. People in some cities have strong traditional values. All these affect locals' desire to have children," Zhu said, noting that a pilot policy here can serve as an example to observe the impact of the third-child policy and a reference for future decision-making.

Feng Xiaomin, an NPC deputy and the principal of Yichun Maternal and Child Health Care Hospital in the city of Yichun, Northeast China's Heilongjiang Province, found that although people living in some counties along the Heilongjiang border have already been allowed to have three children, she has only come across two such families in the past five years.

She said her proposal would include childcare services in the basic public service policy, increase subsidies for maternity insurance compensation, and extend maternity leave and parental leave.

In the past few years, some Chinese legislators have called for relaxing the family planning policy during the two sessions.

The proposal for the 14th Five-Year Plan (2021-25) period, which was released in November, scrapped the phrase of "family planning" in the previous five-year plans, while putting forth the concept of "inclusiveness" in the fertility policy for the first time, which ignited wide curiosity about its implications.