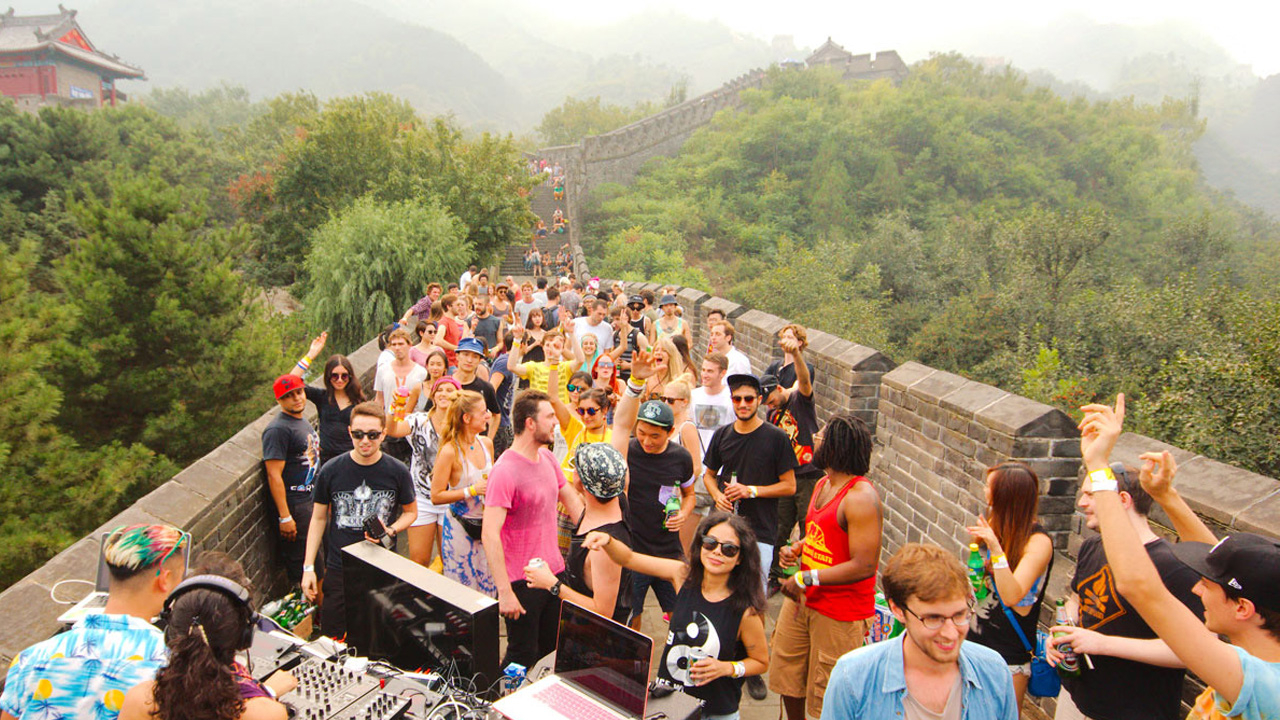 The annual YinYang Music Festival (YYMF) was held at the Great Wall of China June 16-18 offering participants more than just a chance to experience their favorite DJs from all across China and the world performing live.

"I wanted to show the world Chinese nature. The Great Wall is a beautiful reflection of this nature and the perfect place for electronic music to play. But music is not enough. We wanted to help the forest near the Wall," YYMF organizer DJ Rainbow High told CGTN Digital. "So we decided to use a portion of tickets from every festival we do to help the environment."

She said the YYMF started in 2014 from the heart with the quest to bring a new, "globally outstanding electronic music festival experience to China and to grab worldwide attention about the Chinese electronic music scene."

"It’s such a magical and special festival, the concept itself, the surroundings, the people. You connect with the Great Wall, the landscape, and the people through the music," YYMF attendee and Portugal native Joana Saavedra told CGTN Digital on Monday. "Having a music festival in one of my favorite places in China makes it even more special."

Now, five years later the YYMF has become one of the oldest running electronic music festivals in China attracting visitors and media attention from all corners of the world.

Wei Wei from Lanzhou in northwest China's Gansu Province was persuaded by friends to attend this year's YYMF.

"My friends encouraged me to come because I had been pretty upset recently," She told CGTN Digital. "I'm glad I came because the entire event is just a beautiful mix of people."

What separate’s YYMF from the scores of other music festivals happening in China and around the world is its various initiatives.

“It fits perfectly with the global atmosphere. We're here to have fun but also spreading environmental awareness,” festival attendee Francis Perouse told CGTN Digital. “It starts by cleaning your own mess at the end of the festival and this year raising money for the Tianjin Forest.”

The money Perouse is referring to is the money the YYMF will use from a portion of its ticket sales to build a YinYang Festival Forest in Tianjin in China.

“With that amount of money we are going to work together to do some planting in Tianjin,” Secretary-General Jinfeng Zhou of the China Biodiversity Conservation and Green Development Foundation told CGTN Digital. “This is a great vehicle for us to promote and educate about wildlife diversity and conservation in China.”

Party with a purpose

Saavedra said YYMF's commitment to initiatives such as building a forest in Tianjin makes the festival even more attractive.

"You feel you are part of something real and with purpose and in the end every small action can really make a difference in the world," she said.

Perouse has attended the festival every year since it started.

“It combines everything I enjoy in a festival – a gorgeous setting, local accommodations, fun crowd, (and) decent music,” he said.

The France native is such a fan he organizes a chartered bus for 40 to 50 of his friends each year to join him at the Great Wall.

“It's a great way to share an amazing experience with old friends and meet a bunch of wonderful people,” Perouse told CGTN Digital.

Music festivals around the world are proving why they are a party with a purpose.

The Roskilde Festival is a Danish music festival held annually south of Roskilde in Denmark. It is one of the largest music festivals in Europe and the largest in Northern Europe. It was created in 1971 by two high school students and a promoter. Since 1971 Roskilde Festival has raised more than 50 million US dollars for various charitable organizations including Doctors without Borders, Amnesty International, Save the Children, and the World Wildlife Fund (WWF).

The Nkabom World Music Festival in Ghana is a way for musicians and performance artists to expand their outlook in an environment that has a timeless tradition of supporting and fostering arts and cultural traditions.  Nkabom means “unity” in the Twi language. This festival held in the village of Okurase, Ghana unites various cultures through music and performance art.

Its purpose is to help African villages attain sustainability. According to their website, the people of Okurase have a vision of African villages with safe water and proper sanitation, economic self-sufficiency, improved health and nutrition, increased educational opportunities, access to the Internet and technology and using renewable energy sources.

In the US every year Lollapalooza dedicates an entire section of the grounds called "Green Street" to various green initiatives, such as eco-friendly shopping. The festival also partners with organizations like Rock & Recycle, Green Mountain Energy, and Compass Green to get fans involved through gardening workshops, volunteering, and more.

The festival’s popularity and reach are taking it globally with various versions of Lollapalooza happening around the world in places like Stockholm, Sweden, and Santiago, Chile the home of the first international version of the festival.

Whether or not the YYMF will go global remains to be seen, but for now fans from around the world will continue to make the annual journey to the Great Wall.

It's worth the trip!

“I’ve been to music festivals all over the world and this by far is the most amazing simply because of the people,” South Africa native Darian Topkin told CGTN Digital. Everyone person attending this event has the same vibe and spirit as you, we love history and having a good time.”

One attendee CGTN Digital spoke with flew thousands of miles from the US for only a few days just to attend the YYFM.

“I came to see my friends that live in China, and to experience YinYang again. Some people thought I was nuts to travel halfway across the world for a 3-day festival. But I think those who had been to YinYang before knew why I was coming,” American Jed Bodine told CGTN Digital. “It was totally worth the days I spent on a bus, in an airport, and on a plane.”