CHINA Music shop lifts vinyl out of its death spin

Music shop lifts vinyl out of its death spin

Vinyl records, CDs, tapes ... in this digital era, these words are seldom heard, but not for An Peng, who has lived his dream of running a record store in Beijing for the past 20 years. 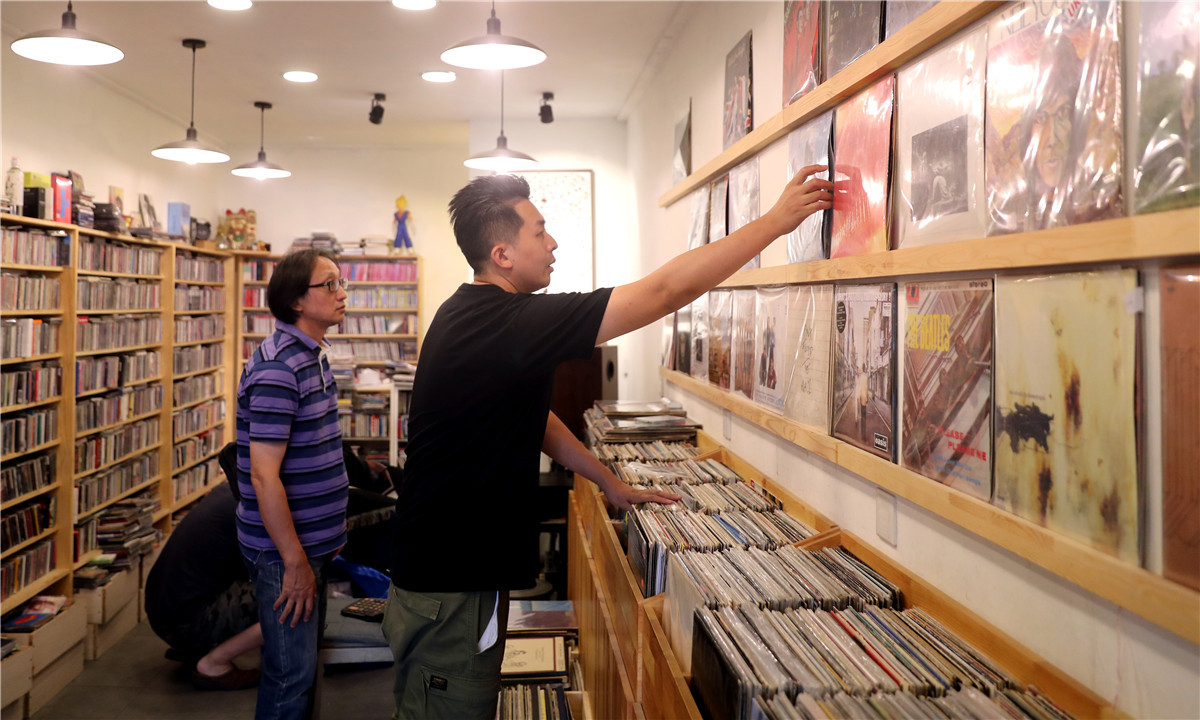 An Peng helps a customer find a vinyl record at his store in Beijing. (Photo: China Daily)

In An's store, some customers are occupied browsing shelves full of CDs and records while others sit on a sofa playing their vinyl discs on a record player, enjoying the music with their eyes closed.

As the needle of the record player tracks a classical music record, the melody lingers in the 20-square-meter store, immersing the customers in its notes.

In recent years, streaming music online has exploded in popularity and it has become difficult to find a record store like An's.

Cool Music is located in Dongsi Street, an old road in Beijing's downtown area. "People seldom come to buy CDs now. They prefer to open music apps on their phones and listen to music that way," An said.

When An was a child, music was his favorite pastime and it was always his dream to open a record store.

In 1999, then 23-year-old An started his first record store of around 500 square meters, in Beijing's bustling Dongdan district. "It was the hottest time for the record market," An explained.

Over the years, his store has relocated five times.

"To a degree, the size of my store reflects the ups and downs of vinyl records," An said. "There used to be thousands of record stores in Beijing, but now it's only down to a few that still hold on."

With increasing monthly rent, An admitted he was unable to make much money from the business.

"It's all about passion," he replied when asked about the reason for his perseverance. "I feel a sense of gain when sharing beautiful music with others."

Some say album sales are dying as fast as streaming services are rising. US retail giant Best Buy abandoned the sale of the humble CD in its stores last year, according to Billboard magazine.

But there is still a loyal group of people that prefer to enjoy music the old-fashioned way, and swear by the fidelity of vinyl records over modern music formats, such as MP3s.

"The true fans never left," An said, noting some customers have been shopping at his store for 20 years, even coming from outside the area. "Some foreign clients come to me for classical records."

Ma, a frequent visitor to An's store, has been friends with him for more than 10 years. He goes to the store every month.

"I was just a high school student when I first set foot in Cool Music. Now I come here sometimes with my teenage son," said Ma, adding that his son is also a music fan.

"It feels different finding a record in the shop from shopping online," said Ma. "Here I can talk and exchange views with An and other music fans. Music binds us together."

An said, "Some say vinyl records will eventually die out and be replaced by digital music, but I don't think so." He added that vinyl records offer the purest form of music for people to enjoy.

According to An, the number of people shopping for vinyl is on the rise in his store, with more and more teenagers discovering its appeal.

An is confident vinyl will outlive other audio and video formats, which were superseded by new technologies. "It's video stores that have gone, while record stores are still standing," An said.