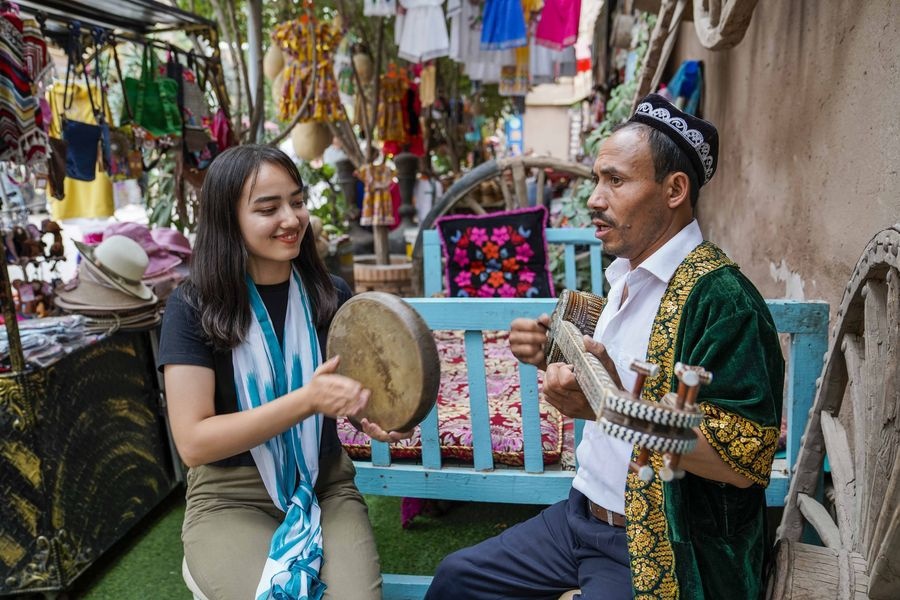 "My grandfather and my father prayed in the mosque. Now Muslims nearby and I also pray in the mosque. Why did they say the mosque has been demolished?" a Muslim resident from Hotan Prefecture in Northwest China's Xinjiang Uygur Autonomous Region said, refuting some Western media reports that the Id Kah Mosque  have been demolished.

"Some people have said that the Id Kah Mosque in our Yutian county has been demolished, which is a total lie. I live near the mosque, and I have grown up with the mosque all my life," said Metkurban Metsedi, a Muslim who was invited to a press conference held by the Xinjiang regional government on Wednesday.

Some Western media and anti-China outlets claimed that the local government has forcibly demolished the Id Kah Mosque, citing this as "proof" that Xinjiang is "repressing" Muslims and ethnic groups.

Metkurban refuted these rumors, saying that the mosque near his house has a history of more than 800 years, and it has been designated as a cultural relics site under the protection of the state.

"I have no idea why some people would say that the Id Kah Mosque would be demolished. If they really care about us, why not pay a visit here in person in order to see the truth for themselves?" he asked.

Aside from Metkurban, Islamic clergymen from many places in Xinjiang were also invited to attend the press conference. They also shared their experience of witnessing mosques being renovated and protected, and receiving support for their pursuit of religion.

In responding to questions on whether religious figures have been detained in Xinjiang as some Western media reported, Esbiton Saimahdi, an imam of the Oshakand Mosque in Gilgrang township, Gongliu county in Ili Kazakh Autonomous Prefecture, said these reports are "nonsense and slander."

"On the contrary, the Chinese government has been doing a lot to promote the healthy development of Islam. As a member of the Islamic clergy, I have the best say," Esbiton said.

The imam said that those so-called detained religious figures actually are not clerics. They are criminals who, in the name of Islam, promote extremist religious ideas and engage in separatist, destructive and violent terrorist activities.

"Some religious figures of moderate faith are rejected, persecuted and even killed by them… Even a group of respected figures of Islam, such as Aronhan Haji, Yunus Stik Mawla and Jüme Tahir, were murdered," he said.

These extreme acts have brought untold suffering to the people of all ethnic groups in Xinjiang, including Muslims, and greatly damaged the image of Islam, said the imam.

There have been no violent or terrorist attacks in Xinjiang in nearly four years. Religious activities of Muslims in the region are being carried out normally. The Ili Branch of the Xinjiang Islamic Institute recruits more than 60 students every year to train as Islamic clerics. All this proves that Islam is not being eradicated in Xinjiang, but it has instead robustly developed.