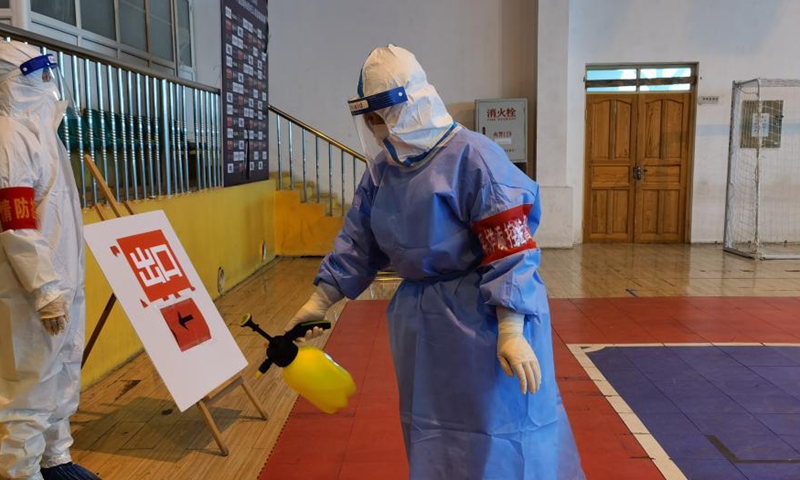 A health worker sanitizes a site designated for the third round of citywide nucleic acid testing in Manzhouli, north China's Inner Mongolia Autonomous Region, Dec. 3, 2020. Manzhouli launched its third round of citywide nucleic acid testing on Thursday morning. As of 7 a.m. Thursday, Manzhouli had 21 domestically transmitted cases, two asymptomatic carriers and two suspected cases. Their 1,082 close contacts have been placed under medical observation. Epidemiological surveys and source tracing work regarding the cases are underway. (Xinhua/Darhan)

Residential communities and working venues related to the three cases have been locked down to prevent the virus from spreading, said the local authorities, adding origin tracing and epidemiological investigation is ongoing and the public should not be panic.

All the residents are advised not to go outdoors unless if it's necessary. A series of measures were also announced on Saturday.

Public security authority announced that anyone hiking commodity prices and hoarding for speculation will be punished.

Manzhouli is a city bordering Mongolia and Russia, with many China-Europe freight trains passing through every year, contributing to the global economic revival and supply chain stability amid the pandemic.

More than 3,000 China-Europe freight trains had passed through Manzhouli by the end of September, achieving the annual 3,000-train goal two months ahead of plan, Xinhua News Agency reported in October. Among them, 1,469 trains were Europe bound, 1,659 were China bound, a year-on-year increase of 11.2 percent and 35 percent respectively.