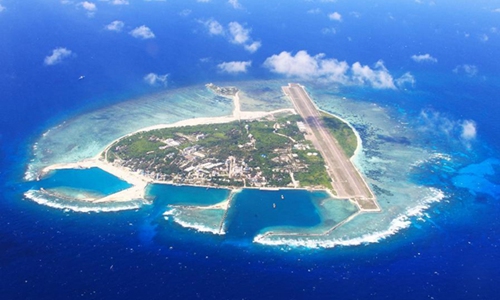 Chinese authorities released on Sunday standard names for 25 islands and reefs as well as 55 undersea geographic entities in the South China Sea in a move that Chinese experts praised for reaffirming China's sovereignty in the region.

China's Ministry of Civil Affairs and the Ministry of Natural Resources released the names, longitudes, and latitudes of these places.

Qian Feng, a senior fellow at the Taihe Institute and director of the research department of the National Strategy Institute at Tsinghua University in Beijing, told the Global Times Sunday that the standardization reflected China's sovereignty over these listed islands in the South China Sea and their surrounding waters, which was not only consistent policy of China but accorded with the United Nations Convention on the Law of the Sea

According to media reports, in December 1934, China for the first rime standardized the names of 132 islands, reefs, beaches and sands in the South China Sea.

The government of the then-Republic of China in December 1947 revised and standardized 167 names in the region.

After the establishment of the People's Republic of China in 1949, related authorities released standardized names of 287 islands in the region in April 1983, a move that Chinese experts said indicated China's improving precision and regulation of the nomenclature and location of islands and reefs in the South China Sea.

The names announced in 1983 will stay effective after the Sunday standardization, according to the ministries. The latest names came one day after the State Council, China's cabinet, announced the establishment of two new districts in the city of Sansha to administer waters in the South China Sea, which Chinese experts said was a normal move for better scientific management and to safeguard territorial sovereignty.

Qian noted that the establishment of the two districts was also aimed at reiterating China's actual jurisdiction in the South China Sea given US warships and aircraft frequent intrusions into the region, challenging China's sovereignty and endangering China's maritime security.