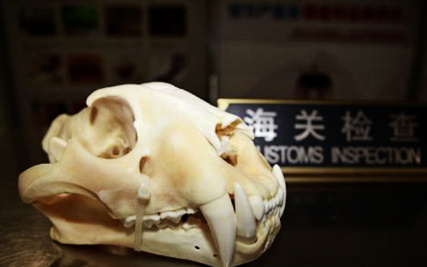 The article in question is a tiger skull weighing 840 grams approximately, with a length of about 30 centimeters. This constitutes the first such seizure in recent years.

On the afternoon of June 6, a Chinese passenger arriving to Nanjing from Vancouver, Canada attempted to enter Nanjing Lukou International Airport without reporting to customs. Upon examination, X-rayed baggage registered a suspicious image. Upon further inspection, a complete tiger skull was found in the luggage.

It is worth noting that tigers have been identified as a protected species at the Convention on International Trade in Endangered Species of Wild Fauna and Flora (CITES). CITES is an international institution whose aim is to ensure international trade in specimens does not jeopardize the survival of plants or wild animals.

Due to the sharp decline in forest resources and the continued exploits of poachers, the number of wild tigers in the world has dropped from 100,000 to around 3,000 in the last 100 years.

Anyone carrying a specimen of an endangered animal or plant, or their products, must carry an authorized certificate on their person and declare such possession of their own initiative. Trafficking and illegal trading in endangered species or their products deemed criminal in China and are punishable by law.

Authorities have been calling on the public to refrain from trading in endangered species such as ivory, corals, cockroaches and crickets, and promoting the active protection of threatened wildlife through responsible actions.