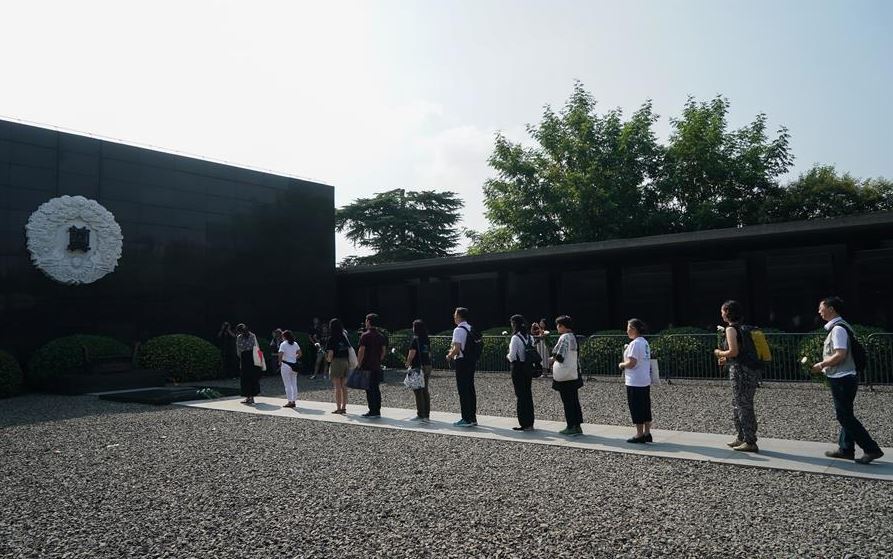 A total of 20 representatives from Japan and over 140 youth representatives from ten countries including China, the Republic of Korea, the United States and the Philippines, attended the event held in the Memorial Hall of the Victims in Nanjing Massacre by Japanese Invaders, mourning the 300,000 people who were killed in one of the most barbaric episodes of World War II.

Japanese invaders slaughtered about 300,000 Chinese during a six-week rampage after they captured the city, which was then China's capital, on Dec. 13, 1937.

Members of an anti-war NGO based in Japan's Kobe laid wreaths and paid tribute to the victims in silence. It was the 23rd time the group had attended the peace assembly in Nanjing.

"Now, we are here, standing on the land where the slaughter took place, to commemorate the victims who were killed in the slaughter," said Miyauchi Yoko, head of the group.

"I learn something new, know more about the truth and reflect on more things every time I come to Nanjing," said Monnaga Shuji, who has been to Nanjing many times.

It's a pity that many people in Japan still deny their war crimes including the Nanjing massacre and Unit 731, a germ warfare unit in northeast China's Heilongjiang Province, he said.

"I want to face the truth and history directly in Nanjing, solve the puzzles that have been lingering in my mind, and learn and communicate with peace lovers from different countries and regions," said Ishiguro Masakazu, a student from Ritsumeikan University.

This is his second visit to Nanjing. He once taught a history class in high school, and the difference between what was written in the textbook and historical facts distressed him.

After the assembly, the youth representatives wrote down their understandings and wishes for peace.

"We remember history not to extend hatred, but to call on the continuous pursuit for peace, which requires joint efforts by young people from more countries," said Jia Haiyang, a student from Harbin Institute of Technology.