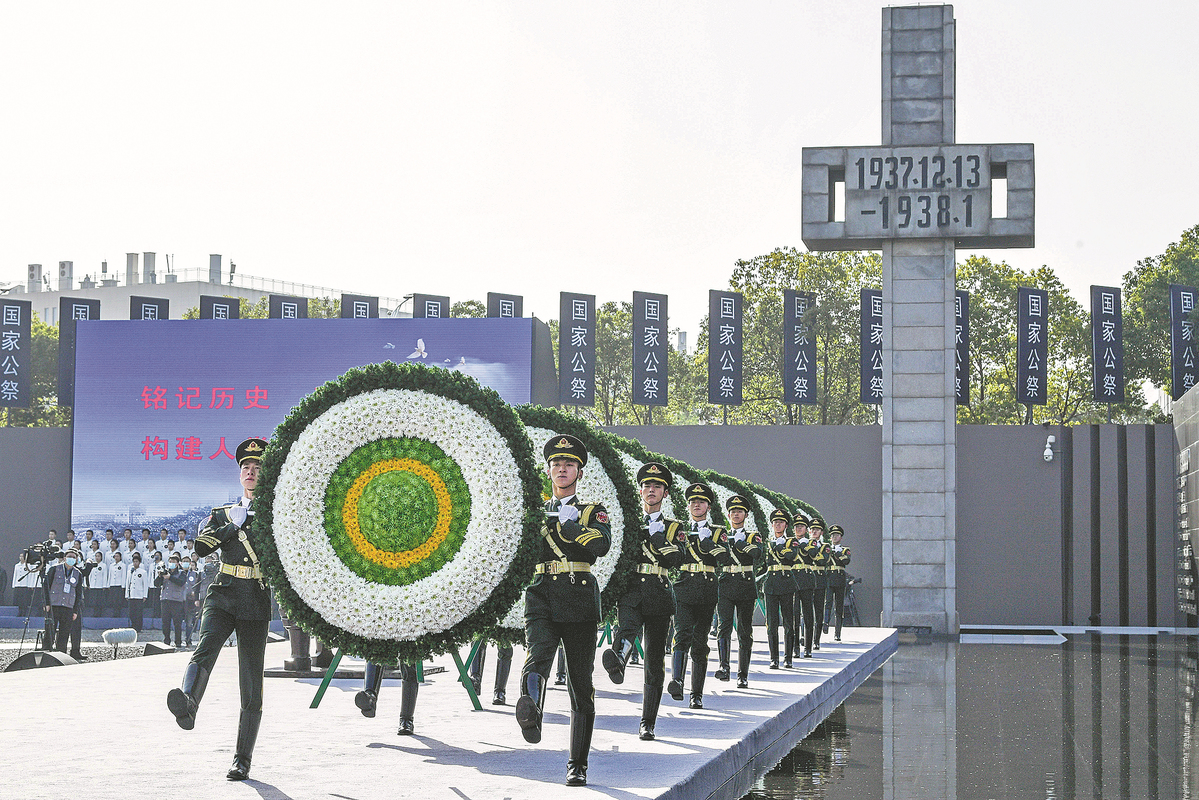 People's Liberation Army soldiers carry wreaths in memory of the victims of the Nanjing Massacre during the ninth national memorial ceremony held in Nanjing, Jiangsu province, on Tuesday. (Photo: Xinhua)

Sirens echoed across Nanjing, Jiangsu province, and the city came to a halt at 10:01 am on Tuesday as China held its ninth national memorial ceremony to mourn the 300,000 victims of the Nanjing Massacre.

At the Memorial Hall of the Victims in Nanjing Massacre by Japanese Invaders, the national flag flew at half-staff, soldiers placed wreaths beside the memorial and thousands of people stood at the square with white flowers pinned to their chests to convey their condolences.

People in the city observed a minute of silence in remembrance of the victims, drivers stopped their vehicles and sounded their horns and doves were released to fly over the square to symbolize peace.

"Since the normalization of China-Japan diplomatic relations 50 years ago, the fruitful exchanges and cooperation between the two countries in various fields have significantly benefited their people and promoted regional peace, development and prosperity," Cai said.

"China and Japan should communicate with sincerity and credibility, learn from history, chart the course of bilateral relations from a strategic perspective and establish a relationship that meets the demands of the new era," Cai added.

In 2014, the Standing Committee of National People's Congress, China's top legislature, designated Dec 13 as the national memorial day for the victims of the Nanjing Massacre.

When China started to register the survivors of the massacre in the 1980s, more than 1,000 were still alive. In 2014, when the country first commemorated the national memorial day, the number had plummeted to over 100.

With seven survivors of the massacre passing away this year, the number of registered survivors is currently 54. The average age of these survivors is 92.

Ma Tingbao, a survivor of the massacre, said that he hopes China and Japan can pass the spirit of friendship from one generation to another. "We want peace, instead of wars and tears," said Ma, 87.

The Chinese government has preserved the survivors' testimonies, recorded in written documents and video footage.