Li Caifeng, 95, had lived in her two-storey house for decades, but a few years ago, she decided to lease the building to a local development company specializing in historical renovation, with the aim of ensuring its longevity. 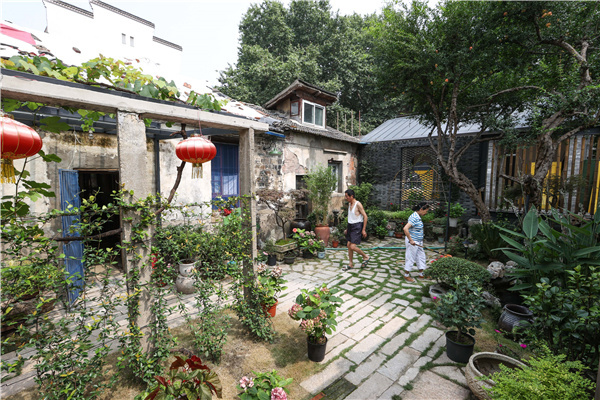 A shared garden in the Xiaoxihu neighborhood, which is going through a renovation project by the government, in Nanjing, Jiangsu province. (Photo: Xinhua)

She moved to an apartment nearby, keeping a close eye as the old house was turned into a coffee bar. Apart from necessary renovations, many original features remain unchanged, from the general layout to the brick walls.

"We have a wardrobe that has a history of about 150 years. It's broken, but my mom didn't want to throw it away. The company said that they would help restore it and then put it back into the house," Tong says. "We're deeply touched."

Li's house is located in the Xiaoxihu neighborhood of Nanjing, capital of East China's Jiangsu province. Most of the houses in Xiaoxihu, which covers an area of 46,900 square meters, are in poor condition.

In 2017, the local government launched a renovation project to improve living conditions in the area, handing responsibility for this mammoth task to the Nanjing Historical City Protection Construction (Group) Co.

The company offered to renovate homes in the area, preserving many of their original features, while giving residents the chance to lease or sell the properties to the company. Some of the renovated space could then be used for commercial purposes, helping to boost the local economy.

The company also began efforts to update the water pipes, gas system, electricity and internet facilities in the area, to improve the general living conditions for residents.

Residents were given the option of remaining in their homes or moving elsewhere. Of the 810 households in the Xiaoxihu area, about half of them chose to stay.

"A few years ago, we worked on the renovation of an area nearby, which has now become a popular tourist site," says Fan Ning, chairman of the board of the company. "But there's too much commercial activity, and not much of the local life has been kept. So when it comes to the Xiaoxihu area, this time, we want to maintain as much of the original way of life as possible."

Experience shows that finding a balance between old and new is essential to the success of such restoration projects.

"The renovation of run-down areas should protect their historical elements, while at the same time, more convenient and complete public facilities should be built," says Han Dongqing, dean of the School of Architecture, Southeast University.

By the end of this year, the initial results of the Xiaoxihu renovation project should be apparent.

Another resident who is benefitting from the work is Chen Hongrong, 70, who has lived in his house since childhood.

"It was a good one back then, but as time has gone by, the house has become old and run-down," he says.

Without a proper kitchen, he was forced to cook in the hallway, the blackened walls and electric wires bearing testimony to the risk of fire.

Now, the place is undergoing renovation, with the yard turned into a shared courtyard. The house will be divided into two parts, one for himself and another for designers working on the project.

Chen is happy to see the renovation work taking place, and he has gladly embraced the new design.

"This half will be studios for designers, and the other half will be my home, with a new kitchen and restroom. I no longer have to worry about fires," he says.

"When the renovation is complete, I will put some chairs and tea sets in the hallway so the tourists can rest and drink some tea," he says.