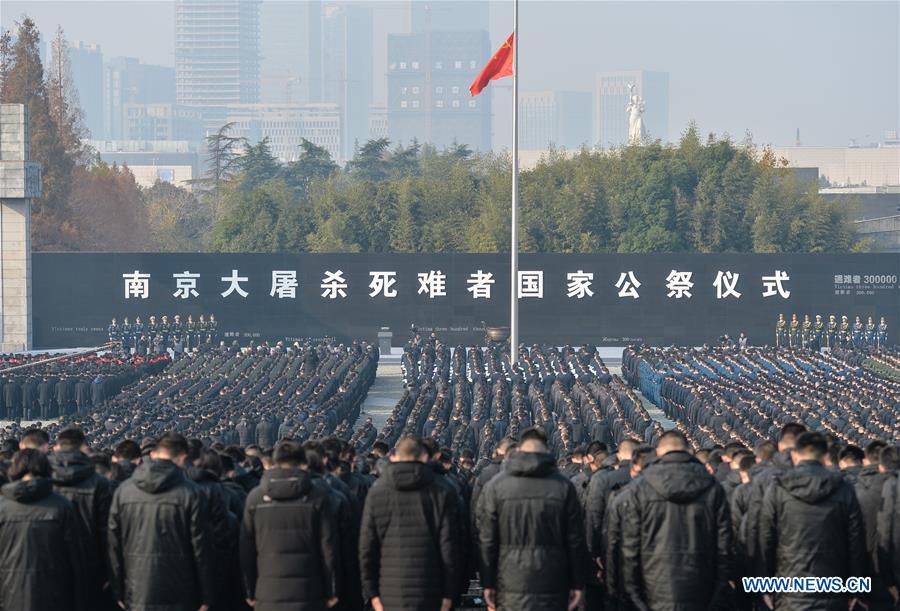 The regulation was approved at a session of the Standing Committee of the Nanjing Municipal People's Congress in late November and is also the first local regulation of its kind.

It has stipulated the etiquettes and norms on the National Memorial Day, such as the "one minute of silence for pedestrians and vehicles including automobiles, trains and ships," as well as "sounding air siren in tribute."

Those who take photos and videos in the uniforms of Japanese invaders at memorial sites will be banned and punished.

Besides, the regulation also stipulates that entertainment activities will be limited, especially at the public areas where memorial events take places. The National Memorial Day will also be included in textbooks for primary and middle schools of Nanjing city.

Why is the regulation necessary?

The necessity of the legislation emerged after certain behaviors and speeches either defaming or insulting the Nanjing Massacre victims, survivors and martyrs outraged the Chinese people after being posted online.

In 2017, photos of several young men, dressed in the uniforms of Japanese invaders, posing at historic sites marking the Chinese people's war of resistance against Japanese aggression enraged the Chinese netizens after being posted on social media.

There were also messages online advertising the Japanese fascism during World War II while distorting historical facts while blaspheming the national emotions.

In April 2018, a law on protecting the reputations of the heroes and martyrs was approved at a session the Standing Committee of the 13th National People's Congress.

According to the legislative committee of Nanjing Municipal People's Congress, the legislation is to lay the legal foundation for the sense of ceremony. It is not only to show respect to the country's history and its lost lives in the war, but also the necessity to cultivate the patriotism in nowadays society.

Yao Zhenglu, a member of the legislative committee of Nanjing Municipal People's Congress, said that the legal experts of the city supported the legislation, many of them have been dedicated to protecting the rights of the Nanjing Massacre survivors for many years.

"By drawing a red line and clarifying the legal responsibility, we will form a long-term administrative mechanism on the protection of the National Memorial Day etiquettes," said Yao in November. "It is also a response to the common request of the Nanjing residents."

Why must the Nanjing Massacre never be forgotten in China?

The Nanjing Massacre is a tragic chapter in Chinese history and has been a trauma to the national emotions and the people.

On December 13, 1937, the invading Japanese army captured the city of Nanjing. During the next six weeks, the Japanese troops killed 300,000 civilians and unarmed combatants, and at the same time perpetrated widespread rape and looting. Averagely one person was killed every 12 seconds.

The atrocities of the Japanese army were compared with Nazi Germany's concentration camps. However, the Nanjing Massacre was either deliberately forgotten or even denied for many years.

In 2015, the UNESCO included the Nanjing Massacre onto its Memory of the World Register despite obstruction from the Japanese right wing, giving global recognition to the carnage. Starting in 2014, China designated December 13 as the National Memorial Day for the Nanjing Massacre victims.

In 2018, at least 20 survivors who witnessed and lived through the massacre passed away. Nowadays, only less than 100 registered Nanjing Massacre survivors are still alive.