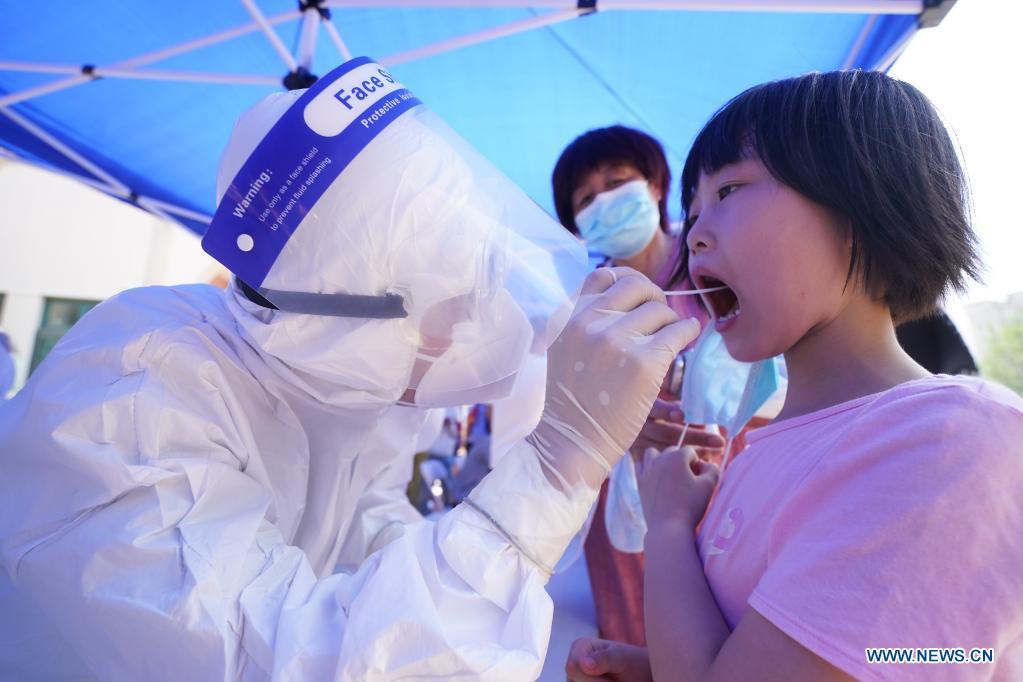 A girl is tested for COVID-19 by a medical worker on Wednesday at a residential compound in Jiangning district, Nanjing, Jiangsu province. (Photo: Xinhua)

Health authorities in Nanjing, capital of Jiangsu province, have begun testing the city's 9.3 million residents for COVID-19 after a group of airport workers tested positive for the virus on Wednesday.

As of 10 pm Wednesday, nine of the workers had been diagnosed as confirmed cases and eight as asymptomatic carriers after nucleic acid testing.

Hu Wanjin, one of Nanjing's vice-mayors, said that as of 5 am Wednesday, 157 contacts have been traced and more are being sought.

Workers at Nanjing Lukou International Airport receive nucleic acid testing on a regular basis as one of the city's routine measures to prevent and control the spread of COVID-19.

Nucleic acid testing of residents in Jiangning district, where the airport is located, was expected to be completed on Wednesday, according to Hu. One of the downtown districts of Nanjing, Jiangning has a population of more than 1.9 million.

The district has upgraded four of its communities and villages from low- to medium-risk areas for COVID-19 and quarantined the Lukou area to contain the virus.

Nanjing authorities said they will test residents in all 11 districts of the city as soon as possible and told people not to leave the metropolis. Anyone wanting to leave the city must present a negative nucleic acid test result taken within 48 hours.

The Nanjing education bureau has notified after-school tutoring groups to suspend classes. Cities near Nanjing, such as Suzhou, Wuxi and Xuzhou, have ordered all residents who traveled to Nanjing in the past 14 days to immediately report to health authorities for nucleic acid testing.

Ding Jie, deputy director of Nanjing's center for disease control and prevention, said that national public health measures in place, coupled with personal health precautions, can help contain the spread of the virus.

"Vaccination has proved to be effective as well," she said at a news conference. "It helps prevent severe infection and death, even if the virus mutates."

To trace the source of the latest outbreak, Nanjing has formed an epidemiological investigation team consisting of more than 1,500 people, including health workers and public security officers.

Fang Zhongyou, director of the Nanjing health commission, said that cleaners working at the airport may have been infected by imported cases. "The source of the virus will be announced after epidemiological investigations and the sequencing of the virus," he said.