A woman in east China's Zhejiang Province was sentenced to death for starting a fire that killed four members of the same family in 2017, local court said Friday.

Mo Huanjing, former nanny of the family of Lin Shengbin, was found to have set fire to Lin's apartment in Hangzhou City on June 21, 2017, killing Lin's wife Zhu Xiaozhen and their three children, according to the Hangzhou Intermediate People's Court.

Mo started the fire using a lighter in the early morning after she had searched for "arson" online, according to the court.

According to the verdict, Mo is a gambling addict and has long been in debt. She came to work for Lin in September 2016. From March 2017 to June  2017, she stole jewelry and watches from the family worth more than 180,000 yuan. Mo also borrowed 114,000 yuan from Zhu with the excuse of purchasing house. The money was also used for gambling.

On June 21 2017, Mo decided to further gain the trust of Zhu by lighting a fire and then putting it out. However the fire spread fast and Zhu and her three children died of carbon monoxide poisoning.

Mo escaped from the apartment and called the police.

She was taken away by police downstairs the apartment building for investigation.

Mo was also convicted of theft, sentenced to five years in prison and fined 10,000 yuan. 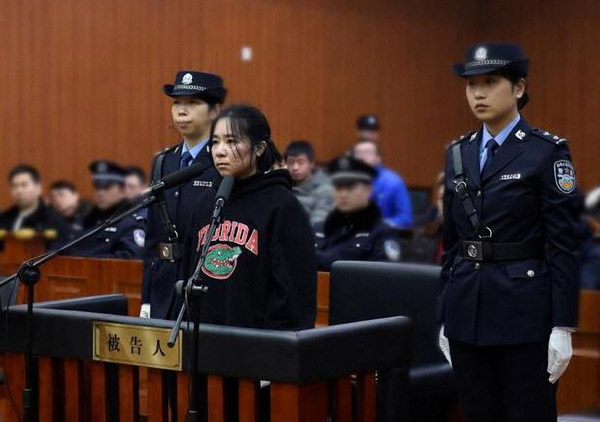 Photo taken on Feb 1, 2018 shows Mo Huanjing stands trial at Hangzhou Intermediate People's Court on suspicion of setting a fire which led to the deaths of four people.(Photo: China Daily)