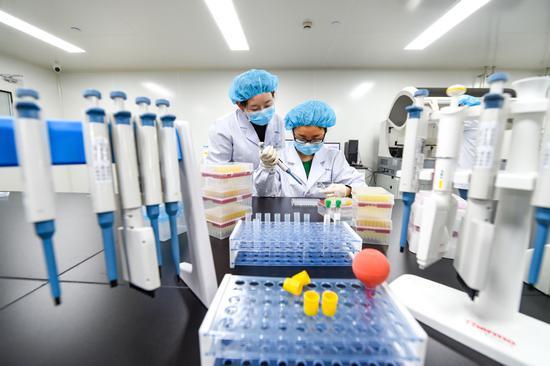 Chinese researchers had published more than 567,000 papers related to biological resources by September, second only to the United States, a recent report said.

A study released by the Chinese Academy of Sciences on Tuesday said that in the past two years China has built a strong technological foundation in gene-editing, synthetic biotechnology and microbiomics, in which all microorganisms in a community are investigated together. The country has also made progress in building botanical gardens, biogenetic repositories, animal resources, biodiversity monitoring networks and data-sharing platforms.

Chinese research institutions published the highest proportion of papers in the discipline of molecular biology and genetics, accounting for 21.2 percent, followed by environment and ecology.

The 220 institutes account for a 10th of the top 1 percent of institutions globally, ranking China second in the world.

Ma Juncai, director of the microbial resource and data center of the Institute of Microbiology, a CAS subsidiary, said that although China ranks second in the total number of papers, it is still far behind the US in terms of the number of highly cited papers, high-level institutions and highly cited researchers.

Biological resources are the most basic materials for human reproduction and development and include animals, plants, microbial organisms and ecosystems.

The data is shared through web portals and has supported 2,336 scientific projects and the publication of 2,795 papers.

Zhou Ju, director of the biotechnology department of CAS's science and technology promotion and development bureau, said strengthening conservation, research and the utilization of biological resources is of great significance, and major economies in the world invest a lot of money every year to carry out major scientific programs.

China has made great progress in the conservation and research of such resources thanks to the support of a number of national repositories, research and development and other scientific programs.