China started its seventh national population count on Sunday, with about 7 million census takers going door to door to document demographic changes in the world's most populous country. 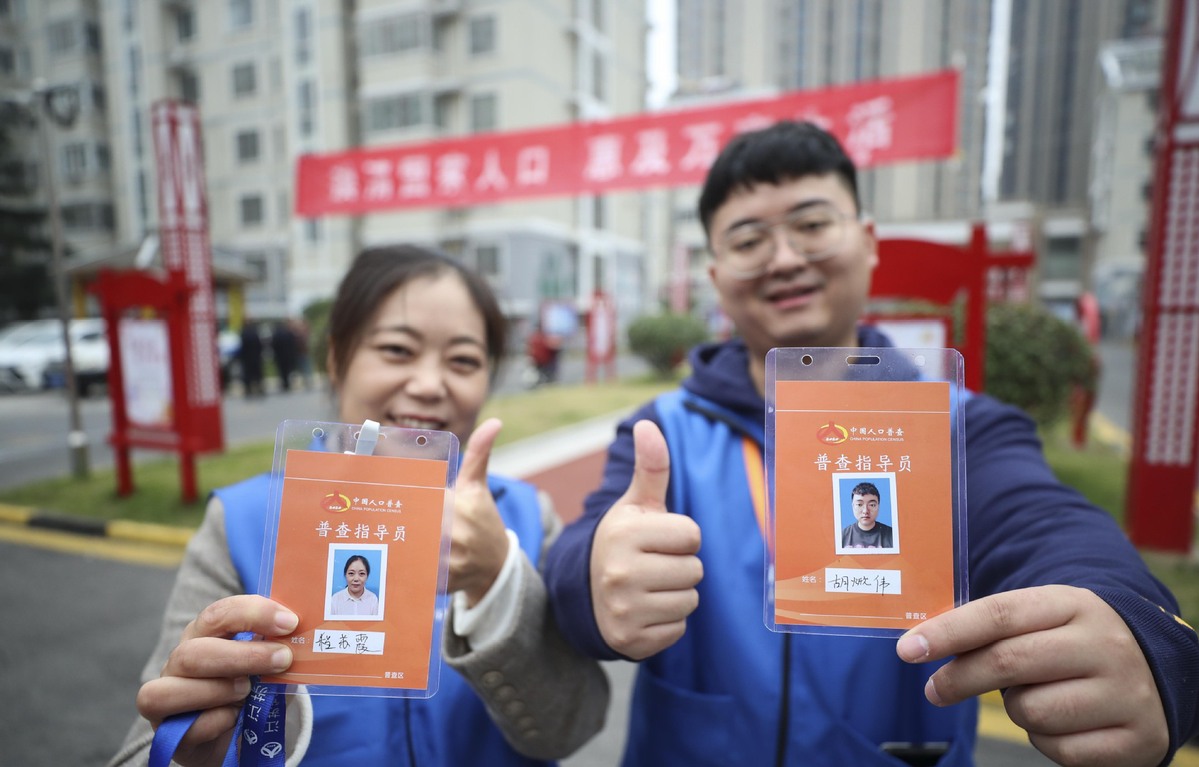 Two census takers pose for a photo at a residential community in Huai'an, Jiangsu province, on Nov 1, 2020. (Photo: Xinhua)

Carrying out the census is critical to understanding the size, structure and distribution of the population, said Ning Jizhe, deputy head of the National Development and Reform Commission, at a video conference to promote the census.

China has conducted a national population census since 1953 and has been carrying it out every 10 years since 1990. The previous census found its population had increased to 1.37 billion.

This time around, fast-developing digital devices and technologies such as smartphones, big data and QR codes are playing an increasingly important role in gathering and processing the tremendous amount of population information in China.

Equipped with a smartphone installed with a census-taking app, Gao Hongyan began knocking on doors on Sunday morning in an old residential complex in Beijing's Chaoyang district.

With the assistance of smart devices, this year's census is proving significantly more efficient than the previous one, Gao said.

"With a smartphone or tablet in hand, we input data directly into the system at doorsteps, a process that takes only about 10 minutes for each household," Gao said.

Huang Chenglin, a staff member at the Liangqing district census office in Nanning, capital of Guangxi Zhuang autonomous region, visited a community on Sunday morning to help residents use a registration service. Under Huang's guidance, the whole registration process took them just a few minutes.

Residents are encouraged to use mobile terminals to report personal and family information.

"With just a few clicks on your smartphone, you can fill in all the census information. It's very convenient," said Wei Ziqing, a resident of Liangqing district.

Big data has also become a big helper in the census project in Jiangsu province.

Zhao Bo, a census taker in the city of Changzhou, did not receive an answer at one apartment in a residential building in the Qingguoxiang community during door-to-door household visits.

Zhao then scanned a QR code on the electricity meter with a mobile app supported by State Grid Changzhou Power Supply. It showed a red code, reassuring Zhao that no one was living in the apartment.

"In the past, when there was no answer at certain apartments, we had to make repeated visits, ask their neighbors to contact the apartment owner or even try to determine whether anyone lived there by the dust on the door," Zhao said.

Yuan Haijun, from the city's census office, said, "Big data helps us find out whether anyone lives in the apartment and thus saves us much trouble and improves census efficiency and accuracy."