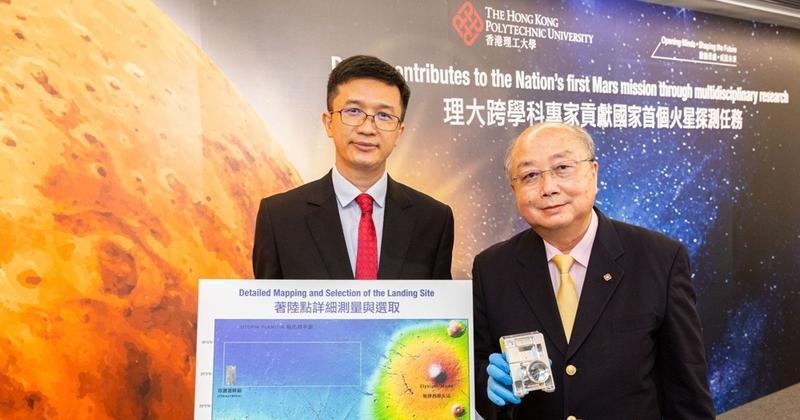 Wu Bo from the Department of Land Surveying and Geo-Informatics of Polytechnic University of Hong Kong (left) and Yung Kai-leung from the university's Department of Industrial and Systems Engineering pose for a photo during a media briefing at the university, May 21, 2021. (Photo: China Daily)

A prominent Hong Kong scientist in planetary mapping and planetary science said China's 14th Five-Year Plan (2021-25) will help Hong Kong build itself into an international hub of science and technology.

Wu Bo, professor from the Hong Kong Polytechnic University's Department of Land Surveying and Geo-informatics, came into limelight in mid-May when news of the China's Tianwen-1 probe successfully landing a Mars rover on the red planet made headlines worldwide.

Wu led a team of young scientists to join the deep-space exploration, alongside with another team of scientists from PolyU. Wu's team had help handpick the landing site of the probe, carrying the Mars rover Zhurong. The other team had designed on the lander a camera able to withstand the extreme temperature and impact force, for monitoring the landing and photographing the surrounding Martian environment.

The successful involvement of the two teams has heated up the discussion about Hong Kong's capacity for a deeper space involvement and bigger role in innovation and technology.

Over the past few years, Wu said, the paradigm shift is already taking place with scholars able to recruit more young researchers with the national funding launched for Hong Kong scientists.

That means students will have more options when considering taking the path of research, Wu added, which is one of main factors at play for the city's trained talent pool in science.

A veteran contributor to national space missions, Wu said he has met many aspiring undergraduates who were eager to attend his courses but few remained committed as they moved up to the doctorate phase.

The lack of future career options has been one of the factors at play, Wu said.

Wu's 20-member team in the Mars project is another case in point. Morgan Liu, who has developed a 3D reconstruction algorithm to help reproduce the Martian surface – a crucial step in identifying the perfect landing site, is the only homegrown student, born and raised in Hong Kong.

The rest of the team comes mainly from the Chinese mainland, where they can always return to as it is a place of many options if they would like to opt for the road of research.

The department of Land Surveying and Geo-Informatics Wu served is the only one of its kind in Hong Kong. It employs around 30 researchers.

The Greater Bay Area, on the other hand, provides another path for researcher to industrialize their research findings, particularly by capitalizing on the entrepreneurial-friendly policies and manufacturing strengths of mainland cities.

While basic research in Hong Kong remains fairly robust, the lack of funding has also caused many practical inconveniences in the scientific field, he said.

Confident about the city's future outlook, Liu said Hong Kong sits next to the world's best example - Shenzhen, which has grown from a village into an innovative technology city in merely 40 years.

At the early stage, practical support and promotion from industry leaders and even the governments are necessary, he said.

Research and development expenditure accounts for only 0.92 percent of Hong Kong's GDP in 2019, less than a fifth of Shenzhen's 4.9 percent.

Eventually, the scientist hoped a matured and fertile soil could be built to allow future students interested in science will have more development directions, such as continuing their scientific research, starting a business, or participating in major mainland and international projects.