When Wu Guizhen and her colleagues at the Chinese Center for Disease Control and Prevention in Beijing received their first sample of an unknown virus on Jan 2,2020, they immediately rushed to identify it. 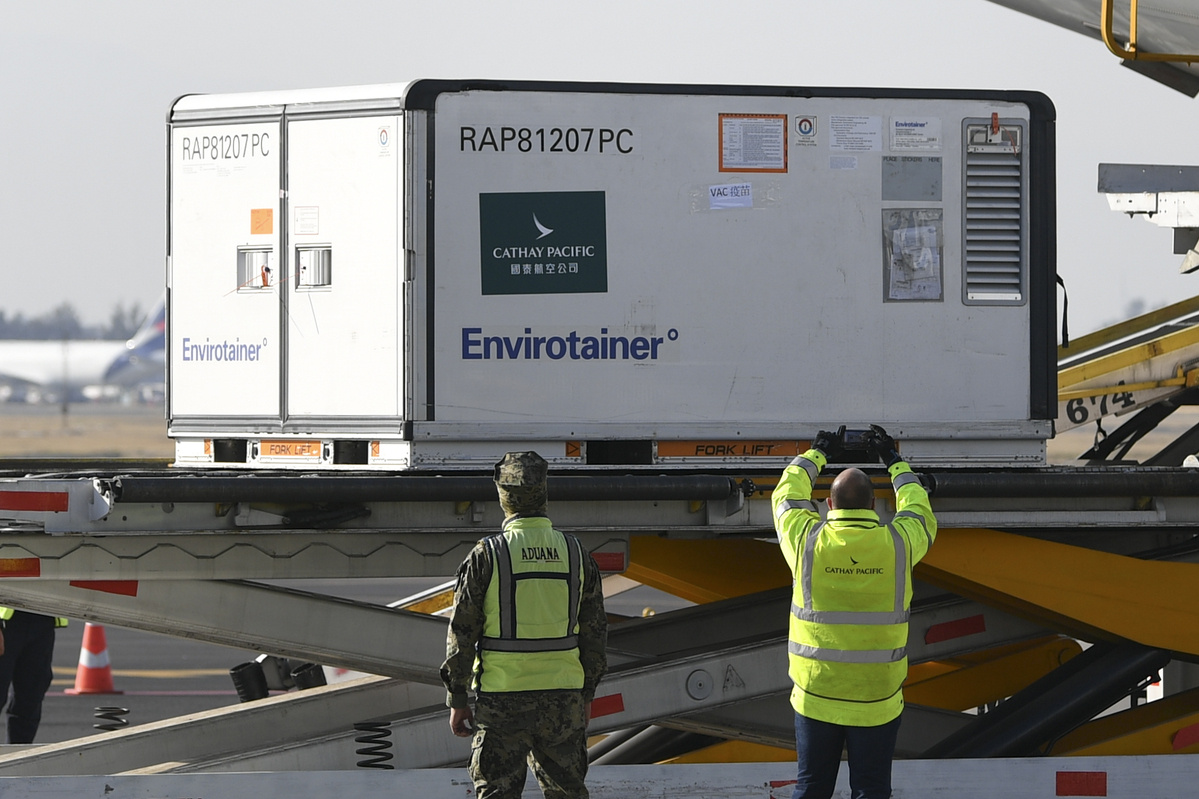 A cargo container of COVID-19 vaccine is unloaded at the airport in Mexico City, Mexico, on Saturday as Mexico received its first shipment of vaccines made by Chinese company Sinovac. XIN YUEWEI/XINHUA

The sample had been collected from a pneumonia patient in Wuhan, Hubei province.

"It's similar to when you cannot see the enemy during a war if you cannot get a clear picture of a virus when fighting an infectious disease," said Wu, chief biosafety expert at the China CDC.

In the initial days of the COVID-19 outbreak, when the disease was referred to as "pneumonia caused by unknown causes", Wu and other virologists at China CDC's National Institute for Viral Disease Control and Prevention had never been busier. The virologists worked around the clock to analyze the sample using the latest technology. Some of them slept at their workplace for days, she said.

In less than a week, on Jan 7, China CDC researchers had successfully isolated a new coronavirus from the sample.

The next day, a team of experts from the National Health Commission gave initial confirmation that the novel coronavirus was the cause of the epidemic in Wuhan. The following day, China shared the information with the World Health Organization.

Meanwhile, China CDC began releasing data on the virus, and the genome sequence of the virus was made available for global access through the Global Initiative on Sharing All Influenza Data on Jan 10, Wu said.

The timely release of information on the novel coronavirus greatly facilitated research and development of COVID-19 vaccines across the world, which has made "the miracle" of market approval of vaccines possible within one year of the identification of a disease, Wu said.

"Following the release of the genome sequence, all countries were able to produce testing kits for the virus, or research and develop vaccines," Wu said. "It also laid the foundation for research in tracing the virus' origin, monitoring its mutation trends and figuring out how the virus causes sickness."

For example, BNT162b2, which was one of the earliest COVID-19 vaccines available for use, was developed soon after the release of the information. The RNA vaccine was developed by pharmaceutical giant Pfizer and German company BioNTech, and approved for emergency use in the United Kingdom in December.

"The development of BNT162b2 was initiated on Jan 10, 2020, when the SARS-CoV-2 genetic sequence was released by the Chinese Center for Disease Control and Prevention and disseminated globally by the GISAID initiative," said a paper published in the New England Journal of Medicine in December.

Wu said "information-sharing is a major contribution China has made to the global fight against the COVID-19 pandemic". She added that such sharing, including origin-tracing, with WHO and the international community, began at the start of the epidemic.

Wu Zunyou, chief epidemiologist at China CDC, said in an earlier interview with China Daily that China's quick identification of the pathogen and development of testing kits played an important role in the rapid containment of the epidemic in China.

The global sharing of the genome sequence also greatly contributed to the worldwide fight against the pandemic. "We did not apply for patents for the research and instead made it free for the public good of all," Wu said.