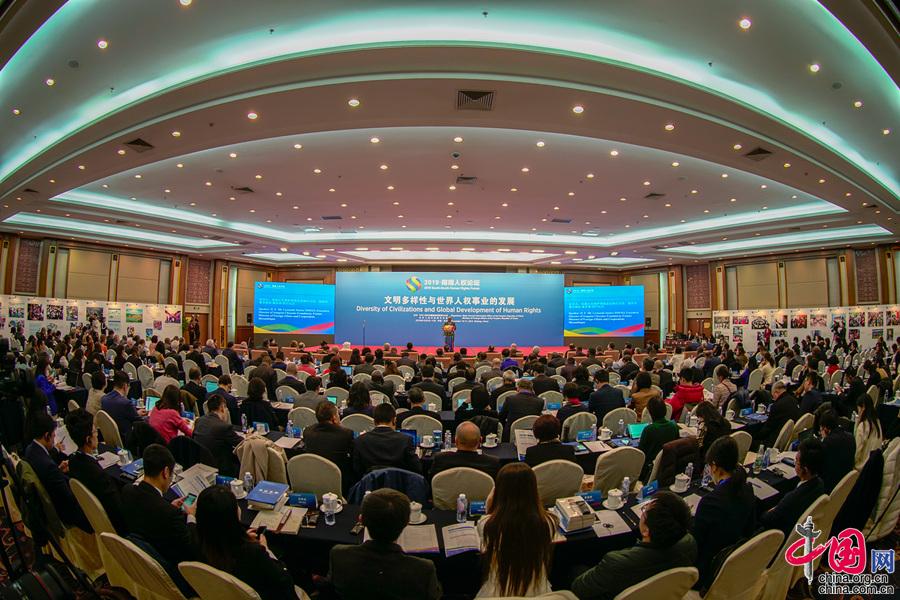 The vision — with pursuit of common progress and development at its core — represents bright prospects for human rights development, and will encourage developing countries to jointly oppose double standards in international human rights, they said.

The two-day 2019 South-South Human Rights Forum, jointly hosted by the State Council Information Office and the Ministry of Foreign Affairs, opened in Beijing on Tuesday, Human Rights Day, which falls on Dec 10 every year to commemorate the day the United Nations General Assembly adopted the Universal Declaration of Human Rights in 1948.

Lionel Vairon, CEO of CEC Consulting in Luxembourg and an expert in development strategies, said that the international community should not ignore China's progress in human rights out of an ideological misunderstanding and prejudice.

"In the future, global governance must make a choice between the policy of strong-power hegemony and the path of a community with a shared future for mankind," he said. "The latter is the wisdom China has contributed to the world."

Speaking in a congratulatory letter to a symposium in Beijing last year marking the 70th anniversary of the Universal Declaration of Human Rights, Xi said China will work with other countries to uphold the common values of humanity — peace, development, equality, justice, democracy and freedom, to safeguard human dignity and rights.

Meanwhile, he said, the nation stands ready to promote fairer, sounder and more inclusive global human rights governance, and to advance the building of a community with a shared future for mankind.

Mao Junxiang, a professor of human rights studies at Central South University in Changsha, Hu­nan province, said Xi's vision provides a solution to coping with the challenges that global governance faces amid a changing international situation, and also draws a clear picture for the development prospects of international human rights governance.

Xi said it is important for the international community to respect and reflect the will of the people in developing countries in the spirit of justice, fairness, openness and inclusiveness. He made the comment in a message of congratulations on the opening of the first South-South Human Rights Forum in December 2017.

Saying human rights must and can only be promoted in light of specific national conditions and people's needs, Xi called on developing countries to steadily raise the level of human rights protection.

Michael Njunga Mulikita, dean of the School of Social Sciences of Mulungushi University, Zambia, said the human rights narrative has been used by dominant developed countries to impose their own agenda on developing countries for political reasons.

"It's important that global governance take into account the position of the developing countries. Otherwise, it becomes governance that is dominated by an elite group of countries at the expense of the large majority," Mulikita said.

Vairon cited the example of the United States' recent adoption of a law related to the Hong Kong Special Administrative Region, saying the law is a new step by Washington to interfere in other countries' domestic affairs. "It has nothing to do with human rights. It suffices to look at the American double standard policy about the war in Yemen, and the treatment of Palestinians, Guantanamo, etc," he said.

Speaking at a news conference on Tuesday, Foreign Ministry spokeswoman Hua Chunying said that in protecting human rights, countries should adhere to the purposes and principles of the UN Charter and respect the development path in human rights that various nations pursue of their own accord.

Politicizing the human rights issue and adopting double standards on the issue must be abandoned, Hua said, adding China stands ready to strengthen exchanges and cooperation in human rights development with other countries based on equality and mutual respect.

As the world's largest developing country, China regards development as the key to solving all problems and the primary task for the Communist Party of China in governing and rejuvenating the country.

Xi said the nation insists that the rights to subsistence and development are primary basic human rights. He made the comment in a congratulatory message in 2016 to an international symposium on the 30th anniversary of the adoption of the United Nations' Declaration on the Right to Development.

"China is becoming more open and confident about human rights. The changes I saw here are examples of the great improvements in the Chinese people's rights to subsistence and development," said Davina Sigauta Rasch, director of Corporate Service of the Ombudsman Office in Samoa, adding that China not only advances its own development, but also helps other developing countries.