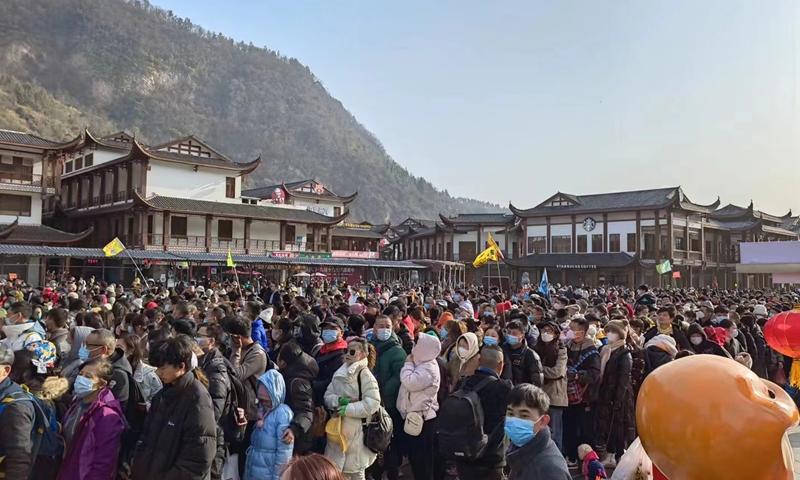 China's tourism industry sees a strong rebound in both domestic and overseas market, with numbers of visitors to some major tourist sites reaching a peak since the epidemic, as the country celebrates the Chinese Spring Festival holidays lasting from January 21 to 27, the first long holiday since the optimized epidemic control and the reopening for traveling.

Popular tourist destinations of the season, ranging from Harbin in Northeast China's Heilongjiang Province to Sanya, South China's Hainan Province, are all thronging with visitors, which experts said it shows China's consumption capacity in the tourism industry and paves the way for a solid recovery in a wider range of industries for the rest of this year.

In the first three days of the Spring Festival holidays, bookings for domestic hotel and scenic spots increased by 56 percent and 79 percent year-on-year while domestic air ticket bookings rose by 30 percent, according to the data that online travel agency Tongcheng Travel sent to the Global Times on Tuesday.

The number of tourists received by the tourist attractions in Sanya increased by 62.44 percent year-on-year on Monday, while the average occupancy rate of hotels in local well-known resort bay areas such as Haitang Bay and Yalong Bay exceeded 90 percent, according to local tourism authorities.

Local air traffic control department predicts that the flight volume in Sanya will remain high throughout the Spring Festival holidays. 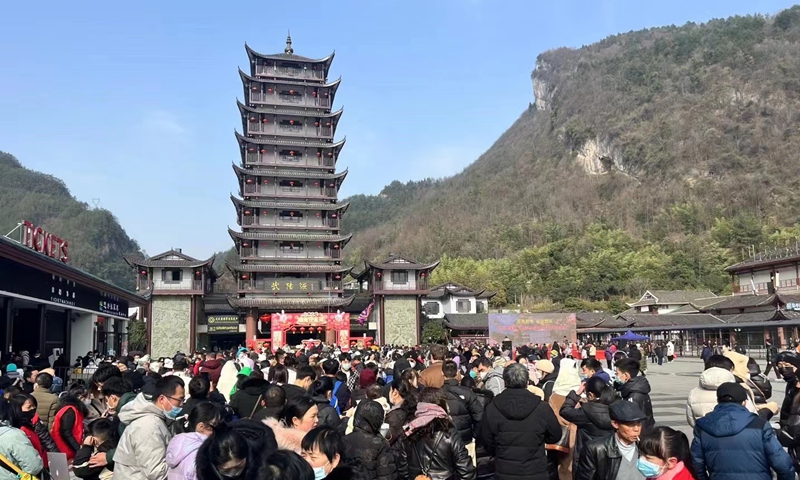 Zhangjiajie, a popular tourist destination in Central China's Hunan Province, serves as an important microcosm of the tourism industry changes.

On Tuesday, core scenic spots such as Wulingyuan received 40,018 tourists, a year-on-year increase of 10 times, followed by 34,853 tourists or 477.99 percent growth at Tianmen Mountain, and 13,476 tourists or 502.95 percent rise at Zhangjiajie Grand Canyon, according to the data that local travel bureau sent to the Global Times on Tuesday.

The travelers and ticket income of the 743 A-level tourist attractions in Southwest China's Sichuan Province on Monday increased by 37.65 percent and 93.74 percent than previous day, data from Sichuan Provincial Department of Culture and Tourism showed.

Metropolitan cities such as Shanghai also witnessed booming tourism and the city's authorities reported 4.412 million tourists in the first three days of the holidays.

Among the nationwide destinations, southwestern provinces such as Yunnan have gained the popularity due to the pleasant weather.

Data from online travel agency Tongcheng Travel showed that the hotel reservations in the four most popular cities in the province - Xishuangbanna, Kunming, Lijiang, and Dali's have increased by more than five times year-on-year. 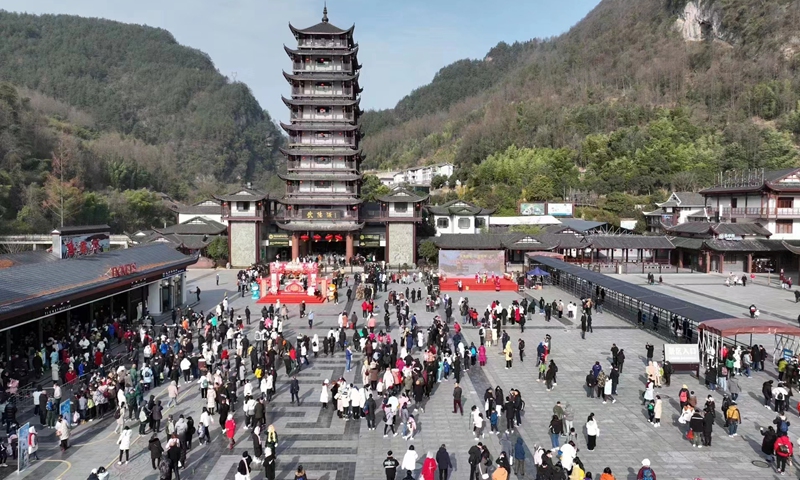 In the wake of the explosive growth of traffic flow, many tourist attractions have issued temporarily restrictions to curb explosive flows for the safety of tourists.

For example, Xi'an Datang Furong Garden, Northwest China's Shaanxi Province, said on Monday that it will take temporary measures to limit the flow of tourists when their number reaches 20,000.

Local scenic spot of Emei Mountain in Sichuan Province said on Tuesday morning that it has suspended selling tickets for Tuesday after hitting the booking ceiling. People must book tickets at least one day in advance at a real-time ticket booking platform.

While domestic tourism embraced a warm-up, overseas travel experienced a whooping increase. Tongcheng Travel's data shows that searches for overseas travel on the platform have increased by 224 percent month-on-month since the Ministry of Culture and Tourism issued a notice on January 20, launching a pilot resumption of group travel.

The most popular destinations for outbound air tickets include China's Hong Kong and Macao, and some cities of the neighboring countries such as Phnom Penh, Bangkok and Kuala Lumpur.

For example, Macao welcomed 71,678 inbound passengers on Monday, of which more than half are from the Chinese mainland, the highest single-day entry number recorded since the pandemic, per data from the Macao Government Tourism Office.

"The booming tourism in the Chinese Spring Festival holidays set a good start for the full recovery of the industry to pre-epidemic level, especially for domestic tourism, after the lifting of the epidemic restrictions," Yang Jinsong, a senior expert with the China Tourism Academy, told the Global Times on Tuesday.

China's consumption capacity for tourism remains huge and now the conditions for distant travel are met, driven by local governments' supportive measures in optimizing epidemic control and boosting travel, they will contribute to the fast rebound of the industry, the expert said, predicting a full recovery for domestic tourism in the first half of this year.