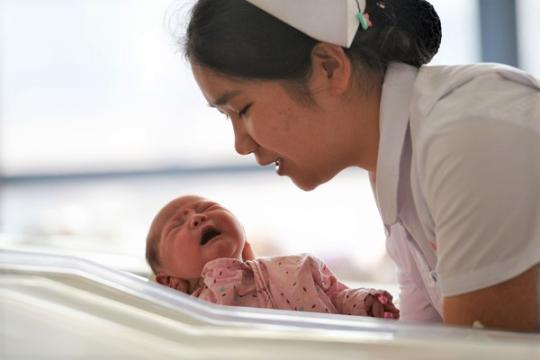 A nurse takes care of a newborn baby at Gansu Provincial Maternity and Childcare Hospital in Lanzhou. (Photo: Xinhua)

China has hit a host of targets set in 2016 to reduce the occurrence of disabilities, an official said on Tuesday.

The achievements are spread across a wide range of areas, including coverage of prenatal checkups, treatment of chronic diseases, and the number of car accidents and work injuries, said Hu Xiangyang, who oversees rehabilitation affairs at the China Disabled Persons' Federation.

He said the rate of pre-pregnancy checks now stands at 96.4 percent and prenatal checkups are at 81.1 percent, which helps detect hereditary, infectious and severe mental diseases.

The pre-pregnancy checkup, which is free of charge, was made a basic public service in 2019.

"The figures show that measures aimed at avoiding birth defects have been better implemented," Hu told a news conference in Beijing.

He said more than 60 percent of patients with high blood pressure and diabetes－common causes of disabilities among older adults－have received regular treatment.

Such chronic illnesses, together with cancer, account for 88 percent of deaths and more than 70 percent of medical spending each year, according to the National Health Commission.

Hu said about 3,400 cataract patients per 1 million population have received surgery, significantly higher than the 2,000 per 1 million target.

About 95 percent of registered patients with severe mental disorders have been placed under treatment, Hu said. The target was 80 percent.

He added that the number of work accidents dropped 39.8 percent and workplace deaths fell 36.3 percent.

The improvement has followed regular workplace safety inspections, alongside efforts to prevent pneumoconiosis, a disease of the lungs caused by inhalation of dust, and other occupational illnesses.

Road safety has also improved, with deaths in traffic accidents per 10,000 vehicles down by 22.4 percent, compared with the target of 6 percent.

For those with disabilities, Hu said that the coverage of basic rehabilitation services and accessible aids and devices stands at 80 percent, adding that 967,000 children with disabilities have received assistance.

The news conference was held on the eve of Disability Prevention Day.

The theme this year is to promote the health of the general public with better prevention.

While addressing the conference, Zheng Xiaoying, director of the PKU-APEC Health Science Academy and a professor at Peking University, said that rural regions still face inadequate "disability prevention resources", referring to a shortage of rehabilitation therapists and other health professionals.

"Public awareness of disability prevention and rehabilitation still needs to be improved," she said.

Authorities including the National Health Commission and the Cyberspace Administration of China plan to launch a publicity campaign on Wednesday to bolster awareness of pregnancy planning, a balanced diet and chronic disease management, among others.

The well-being of the nation's 36 million registered disabled people and more than 40 million "disabled and semi-disabled" seniors who are not officially classified as being disabled is high on the Communist Party of China's agenda to build the nation into a "modern socialist country" by 2035.