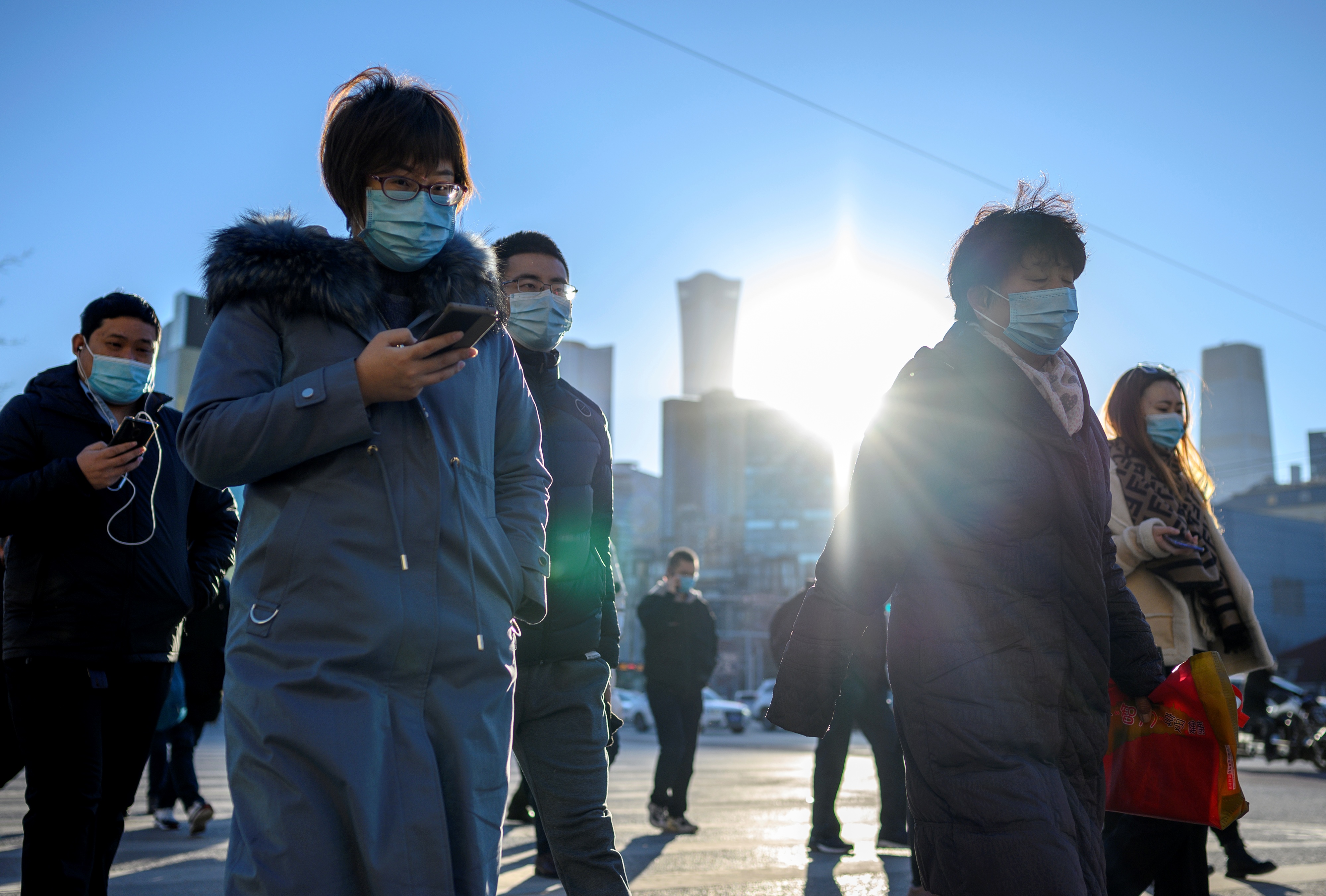 People wearing face masks walk along a street during a rush hour in Bejing on December 16, 2020. (Photo: AFP)

BEIJING, Dec. 28 (Xinhua) -- Less than a week away from the New Year holiday, sporadic COVID-19 cases have resurfaced in China's capital of Beijing as well as northeast Liaoning Province and the southern high-tech hub of Shenzhen, prompting authorities to tighten up epidemic control measures.

In the past 14 days, Beijing has reported a total of nine locally transmitted confirmed COVID-19 cases. Three urban districts in the capital city have conducted large-scale nucleic acid tests in key places where the cases were traced.

The district government conducted nucleic acid tests on more than 800,000 people in 13 villages and towns as of Saturday evening. By 3 p.m. Sunday, 838,270 people had been sampled and 389,294 people had tested negative. The remaining samples are still undergoing testing.

Meanwhile, by Sunday, Chaoyang District of Beijing has tested 234,413 people in three communities where coronavirus infections were reported on Friday. Those sampled have all tested negative for COVID-19.

In Xicheng District, nucleic acid tests have been completed on 9,566 people in key areas related to an asymptomatic case reported on Dec. 23. So far, they have all tested negative for COVID-19.

No new locally transmitted confirmed, asymptomatic or suspected COVID-19 cases were reported in Beijing on Sunday, according to the municipal health commission.

In addition to expanding the range and frequency of nucleic acid tests in the key areas, the capital will conduct mass tests on new employees in service industries such as catering establishments, retail markets, farm produce markets and supermarkets, said Xu Hejian, a spokesperson for the Beijing municipal government, at a press briefing on Sunday.

As for the possible risks and potential dangers in cold-chain food, downtown Xicheng District has started to conduct nucleic acid testing once a week for all employees involved in the cold-chain, catering and food industries since Saturday.

During the forthcoming New Year and Spring Festival holidays, Beijing will not hold temple fairs or large-scale mass cultural activities, said Zhou Weimin, an official with the Beijing Municipal Bureau of Culture and Tourism.

On Saturday, the Beijing Subway released a statement to limit the passenger flow on eight lines and in 24 subway stations to avoid the congregation of passengers amid the coronavirus outbreak.

Experts have suggested complete disinfection on goods entering Beijing and urged the public to take epidemic prevention measures when receiving their parcels.

Five of the newly confirmed cases were reported in the port city of Dalian, while the other was a previous asymptomatic case re-categorized as a confirmed case in Shenyang, the provincial capital.

All three asymptomatic cases were reported in Dalian. The province currently has 40 confirmed cases in the hospital and another 31 asymptomatic carriers under quarantine and receiving treatment, according to the commission.

As of Sunday, Dalian has reported a total of 33 confirmed locally transmitted COVID-19 cases, after four asymptomatic COVID-19 cases were detected during regular nucleic acid tests on cold chain workers on Dec. 15.

Starting from Monday, the municipal government required declaration of disinfection information on all imported and domestic cold-chain food containers and bulk cargo unloaded from the Dalian port at the city's official traceability platform for management.

South China's city of Shenzhen in Guangdong Province reported one asymptomatic COVID-19 case on Sunday, according to the city's health commission.

The infected person, surnamed Wang, had been on two business trips from Shenzhen to Beijing recently.

Wang received a nucleic acid test for the virus after returning to Shenzhen from Beijing on Saturday. The test result was positive, and Wang was diagnosed as an asymptomatic case on Sunday.

The close contacts of the case have all been traced and will be placed in quarantine for medical observation.