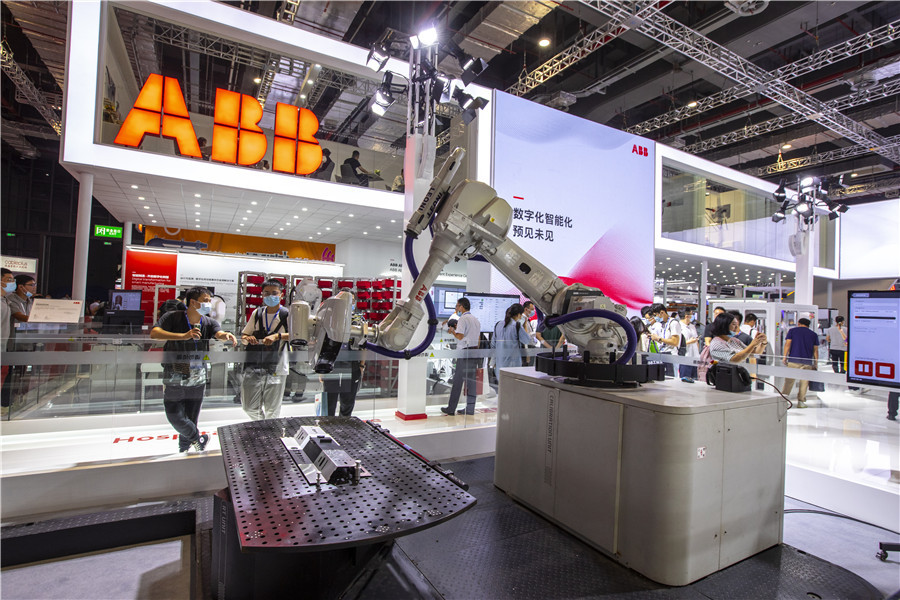 Visitors check out an industrial robot developed by Swiss conglomerate ABB Group at an expo in Shanghai. (Photo: China Daily)

Stance on welcoming outside investors will remain unchanged, official said

China will accurately review foreign investment that affects, or may affect, national security, while avoiding overly broad actions in order to better ensure and protect the legitimate rights and interests of foreign investment, said the Ministry of Commerce on Thursday.

The government will, in accordance with the principles of necessity and reason, implement these policy measures to effectively prevent and resolve national security risks, said Gao Feng, the ministry's spokesman.

The official made the remarks at a weekly news conference, adding that it is international practice to carry out such security reviews.

The official reiterated that the trend of encouraging more foreign-funded enterprises to develop in China will not change.

The ministry will work with other government branches to promote wider, broader and deeper opening-up, fully implement the Foreign Investment Law and other related regulations, maintain fair competition order, and better protect the legitimate rights and interests of foreign investment, over the course of China's 14th Five-Year Plan period (2021-25),Gao said.

The Chinese government will continue to improve its services for foreign-funded enterprises and foreign-funded projects to create a market-oriented, legalized and internationalized business environment, he added.

Zhang Yongjun, a researcher at the China Center for International Economic Exchanges in Beijing, said the security review rules are not a protectionist move or refusal to further open up. Instead, they are in accordance with China's commitment to opening-up on all fronts and aim to reinforce the security mechanism for opening-up.

Impacted by the COVID-19 pandemic and the fact that global supply and demand have been mismatched, China's economy has nevertheless achieved healthy growth, thus satisfying global demand, Wang said.

"This reality has helped attract more global companies to enhance their positions in joint ventures, onshore supply chains and add spending to secure market share across China," he said at an economic forum hosted by China News Service in Beijing on Thursday.

China's actual use of foreign capital surged to 607.84 billion yuan ($94.1 billion) in the first half. That was an increase of 28.7 percent year-on-year and a 27.1 percent rise over the same period in 2019, according to the Ministry of Commerce.

"These steps have boosted systems integration and innovation, accelerated the release of policy dividends, realized efficient intergovernmental department collaboration, as well as created a high-quality, legalized, international and convenient business environment," he said.