CHINA National campaign aims to get wild animals off the table

National campaign aims to get wild animals off the table 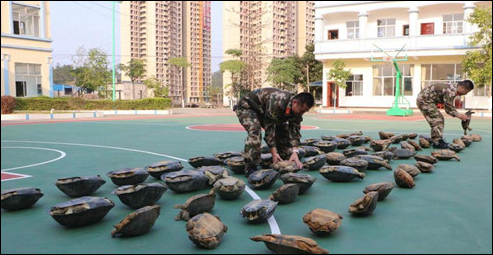 More than 39,000 wild animals have been confiscated as of Wednesday during a nationwide campaign against the habit of indiscriminately consuming wildlife, which Chinese experts take as a responsible gesture by the authorities amid the fight against the novel coronavirus.

All venues where wild animals are artificially bred should be closed and quarantined, and the trade and transportation of wild animals should stop, according to the National Forestry and Grassland Administration (NFGA) on Thursday.

The NFGA will strengthen its monitoring of diseases among wild animals and ask relevant departments to report the abnormal death or illness of wild animals on a daily basis.

Certificates issued to the business operators who breed, sell and transport wild animals for food purposes will be withdrawn and cancelled, the NFGA said.

According to officials from the NFGA, as of Wednesday, more than 350,000 operating places such as restaurantsand markets, and 153,000 artificial breeding places, were cleaned up by Chinese authorities. More than 39,000 wild animals and 1,080 kilograms of wild animal products were confiscated.

Market supervision departments have so far inspected 4.6 million business venues and monitored 1.4 million e-commerce platforms urging them to withdraw, delete and block relevant information on wildlife. About 11,000 business operators were asked to shut down.

It means from now on, terrestrial wild animals, whether captured from the wild or artificially raised, will no longer be edible, and the related industries will face closure, experts noted, which should solve the longstanding chaos in the field of wildlife protection and reflect China's determination to end the bad habit of indiscriminately consuming wildlife.

This action is another major measure for wildlife protection after China's ban on ivory trade in 2017. It will not only benefit China's wildlife, but also have a profound impact on international wildlife protection, Sun Quanhui, a scientist from World Animal Protection, a United Nations general consultative organization, told the Global Times Thursday.

The thorough ban on illegal wildlife trade and breeding is expected to end the long-term chaos in the field of wildlife protection, such as the abuse of licenses for artificial breeding of wild animals, illegally whitewashing the industry and lack of supervision, Sun said.

The ban on the consumption of wild animals expands the scope of the original ban from only protected wildlife to terrestrial wildlife, but aquatic wildlife such as fish were not included in the prohibition.

Residents in southern China have a habit of eating wild animals. In places like Jiangxi and Hunan provinces, there are beliefs that eating owls and eagles could cure headaches. People from Hubei Province believe eating snakes could strengthen their bodies.

Wild boars, civet cats, mules and hares are commonly seen on the tables of some restaurants. Some people think it is a fashionable thing to eat wild animals, reports showed.

It is time to abandon the bad habit of eating wildlife as nearly 80 percent of the newfound diseases in recent decades are from animals, Chinese top respiratory specialist Zhong Nanshan said Thursday at a press conference.