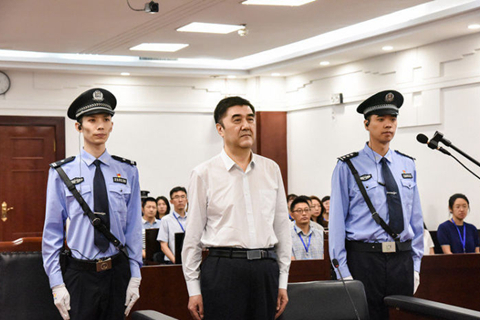 The public prosecutors accused him of abusing his positions between 1998 and 2018 to seek favor on behalf of certain organizations and individuals in contracting projects, promoting products and securing preferential policies and to accept directly or via others money and property worth 79.1 million yuan (about 11.51 million U.S. dollars) illegally from the above-mentioned organizations and individuals in return, according to a source of the People's Procuratorate of Shenyang.

During the above-mentioned period, Nur Bekri served as deputy secretary of the Urumqi Municipal Committee of the Communist Party of China (CPC) and mayor of Urumqi, a member of the standing committee of and deputy secretary of the Xinjiang Uygur Autonomous Regional Committee of the CPC, acting chairman and chairman of the Xinjiang regional government, deputy head of the National Development and Reform Commission and head of the National Energy Administration.

During Thursday's hearing, prosecutors, the defendant and his defense counsel cross-examined evidence presented by the prosecutors and expressed their views.

The hearing was observed by around 50 people, including legislators, political advisors, journalists and members of the public.

The verdict will be announced in due course, according to the court.