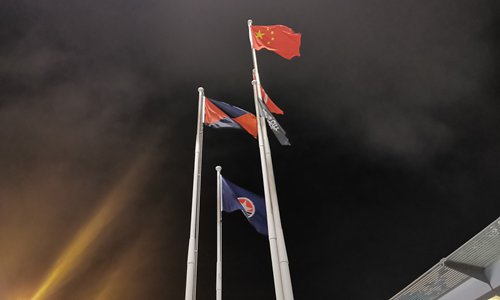 In another patriotic move, Hong Kong residents raised the Chinese national flag in Victoria Harbor late Monday night, after protesters removed it from the Tsim Sha Tsui Star Ferry Pier and threw it into the harbor earlier the day. This was the second such act in two days.

A similar incident happened Saturday midnight when patriotic Hongkongers replaced a national flag that protesters threw into water in the afternoon. They sang the national anthem while raising the Five-Star Red Flag.

On Monday afternoon, after a national flag was thrown into the water, a Global Times reporter read in online forums that some patriotic local residents had called for solidarity to raise the flag again.

"Whenever the flag is taken down, we will raise it again," they said.

Some mainland tourists said they were shocked and angered when they saw the flag removed.  A middle-aged woman told the Global Times that her nephew almost started crying.

Protesters dressed in black and wearing masks could be seen wandering in the vicinity.

One woman, a Hong Kong resident, ripped an anti-extradition bill slogan off the flagpole. She explained that it felt painful to watch Hong Kong secessionists insult the national flag and run over national sovereignty on Chinese soil.

An elderly lady, who joined the violent demonstrations carrying a British flag, posted an anti-extradition bill slogan on a flagpole but it was quickly removed.

"We are Chinese. Why did you guys turn Hong Kong into what it looks like now?" bystanders asked.

The harbor front shopping area is one of the most popular destinations among Chinese mainland visitors. Harbor City officials were contacted to see what kind of protective measures had been put in place but they were unavailable for comment.

Ng Chi Yui, a graduate from the University of Hong Kong, told the Global Times it is unacceptable how the mobs have challenged the bottom line of national sovereignty and desecrated the national flag.

"I hope the mobs will be taken to justice as soon as possible, and I will take the initiative to protect the national flag and safeguard the dignity of the country," Chi said.

According to the National Flag and National Emblem Ordinance, "A person who desecrates the national flag or national emblem by publicly and willfully burning, mutilating, scrawling on, defiling or trampling on it commits an offense and is liable for a conviction to a level 5 fine and three years' imprisonment."

Hong Kong lawyer Albert Wu said throwing the national flag into the sea is a serious insult, and if similar acts continue and people are convicted, the court could consider enacting deterrent punishments.

"Repeatedly desecrating the national flag is a blunt challenge to the authority of the central government and the 'one country, two systems'," Tse told the Global Times, "These protesters will be punished by law and pay for the consequences."