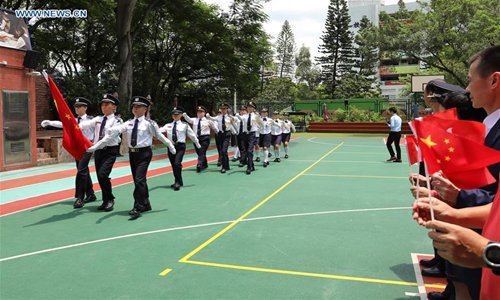 A draft amendment to the Chinese National Flag Law and National Emblem Law was submitted on Tuesday to the Standing Committee of the 13th National People's Congress (NPC) for a second review. The amendment expands the scope for displaying the national flag and emblem in Hong Kong not only in government agencies and schools but also in all public cultural and sports facilities, in order to enhance the patriotic consciousness of Hong Kong people, a lawmaker said.

The draft stipulates that in addition to central government authorities in the Hong Kong Special Administrative Region (HKSAR) and local authorities who hoist the Chinese national flag and emblem during weekdays, public facilities such as exhibition centers, science museums, gyms and public libraries will also display the flag, Tam Yiu-chung, a member of the NPC Standing Committee who attended the meeting, told the Global Times on Tuesday.

"The scope of the display and use of the national flag and emblem has been expanded, with more clear regulations," he said.

The draft also said elementary and middle schools in HKSAR shall add content for teaching the history of the Chinese national flag and emblem, as a part of much-needed patriotic education, Tam said, noting that it would help deepen students' understanding of the country's history.

The draft also encourages kindergartens in HKSAR to raise and hang the national flag in accordance with their regulations.

The law already stipulates that those who desecrate the national flag and emblem will be fined up to HK$50,000 and given a three-year imprisonment in Hong Kong. During the anti-government protests last year, a protester who pleaded guilty to desecrating it got a light punishment, which has sparked online criticism.

"The punishment has not been changed in the amendment this time, but the new draft bans flying the flag upside down," Tam said. Also, those who display the national flag online need to show full respect to it and follow the relevant regulations, he added.

The draft said the standard version of the national flag pattern for internet use was published on npc.gov.cn and gov.cn.

Many public venues in Hong Kong do not hang the national flag, and some previous incidents have aroused online controversy.

For instance, after a photo of the Statue of Liberty was seen on the wall of the AsiaWorld Expo, which was turned into a makeshift hospital for treating COVID-19 patients in August, many netizens asked the Hospital Authority in Hong Kong for an explanation.

The venue was also the place where medics from the Chinese mainland offered help to local residents in combating the COVID-19 outbreak, and such US characteristics hurt many netizens' feelings, according to online posts.

Also, anti-government protesters who removed a Chinese national flag from a pole at Hong Kong's Victoria Harbor and tossed it into the Harbor during a protest in August 2019 - a move that tarnished the country's dignity - was strongly condemned by the HKSAR government and many Chinese people.