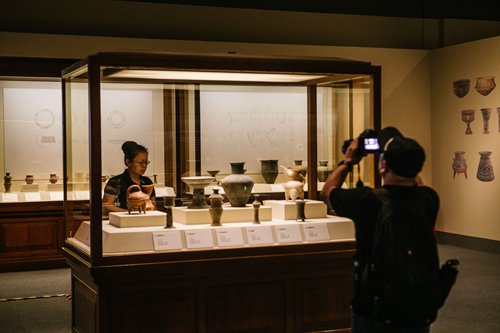 Divided into four sections, the exhibition showcases more than 230 relics, most of which were excavated from the Jiaojia Ruins, as well as pictures and interactive displays exploring the excavation site itself.

The Jiaojia Ruins is the site of a Neolithic village dating to roughly 4,000 to 5,000 years ago. Discovered in 1987, large-scale excavation was not carried out until 2016. Since then, numerous burial sites, ancient walls as well as pottery, bone wares and jades have been unearthed at the site.

To introduce the excavation site in as much detail as possible, the exhibition curators have included a huge map of the historical site that allow viewers to see exactly where the different items on display were discovered in relation to each other.

In front of this map, is a huge glass case containing the remains of a human skeleton that had been found in one of the tombs at the site - Tomb M184. Next to the skeleton are the different pottery wares that had been buried along with it.

Tomb M184 is regarded as one of the most surprising and important discoveries made during the excavation.

"The highlight of the collection is this human skeleton, which has been identified as a very tall man nearly two meters tall," Wang Yueqian, the curator of the exhibition told the Global Times.

Another highlight of the exhibition are computer screens that present 3D models of the tomb. Through the touch screen, visitors can zoom in and out and take a virtual tour of the tomb to see what it looked like when it was first discovered.

The exhibition has impressed visitors with its clear introduction to the excavation.

"I think the exhibition is quite systematic, with scenes of the original excavation and explanatory text panels. They explained some interesting customs from prehistoric times that I never knew existed, like they would carry out tooth extractions before burying someone, which shocked me a lot!" Li Lilai, a visitor at the exhibition told the Global Times on Tuesday.

The Jiaojia Ruins excavation was listed as one of China's top 10 discoveries of 2017.

The exhibition will come to an end on September 9.