CHINA National panda park to open by end of this year

National panda park to open by end of this year 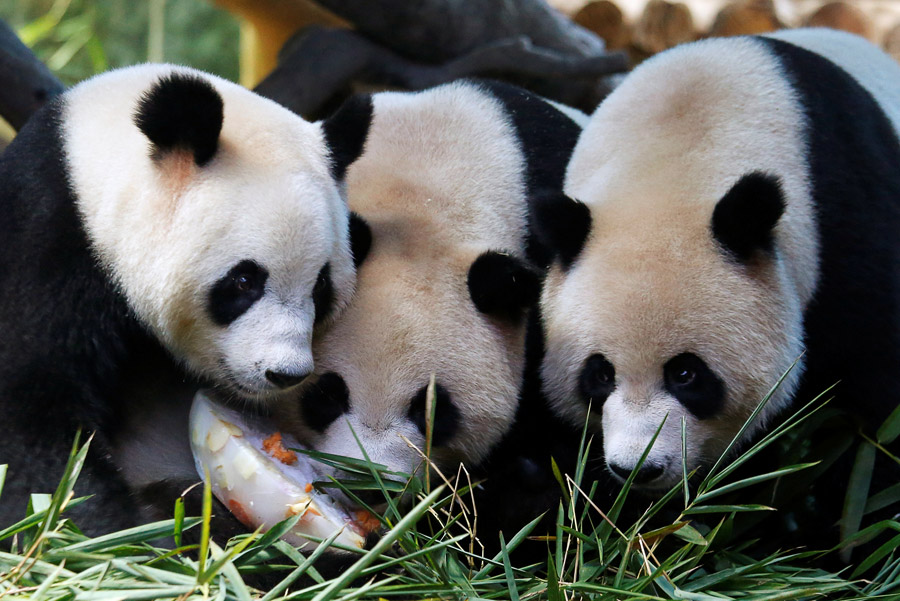 Hundreds of child triplets from throughout China celebrate the fourth birthday of the world's only giant panda triplets－Meng Meng, Shuai Shuai and Ku Ku－on Sunday at Chimelong Safari Park in Guangzhou by offering the trio fresh bamboo. (Photo: Xinhua)

The park's administrative office building is under construction and the park is expected to be operating before year's end, said Yang Chao, director of the administration's wildlife protection department.

"Giant pandas will be the major species under protection in the national park. Apart from them, more than 8,000 kinds of wildlife, including snub-nosed monkeys, will also benefit," he said. "The national park will not only boost the population of wildlife in the region but also protect their habitat for better biological diversity."

More than 80 preservation areas, covering more than 27,000 square kilometers, are to be included in the giant panda national park－one of 10 national parks that will be constructed in China by 2020.

It covers Sichuan, Shaanxi and Gansu provinces, with 74 percent of the total area in Sichuan.

China has 67 nature reserves for the protection of giant pandas, according to the administration. The wild giant panda population has increased from 1,114 in the 1970s to 1,864 now.

The main function of the park is to build passages between several panda habitats, enabling different groups of pandas to interbreed.

By 2017, the country had bred 518 giant pandas in captivity, with nine of those sent back to the wild since 2003. Seven have survived.

"Sending captive pandas back to the wild is a way to give birth to stronger pandas, in hope of growing the population. It will also benefit the group's genetic diversity," said Zhang Hemin, deputy director of the China Giant Panda Protection Research Center.

According to Zhang, once a panda can survive, mate and give birth to a new generation in the wild, the release is classified as successful.

From Aug 23 to 26, the country's first giant panda cultural week will be held in Beijing. An international competition for giant panda image design will kick off, with ideas gathered from around the world. Several exhibitions of panda photography, art, protection work and international exchange will also be held.

Fifty-eight giant pandas have been sent overseas for international research projects, with 47 baby pandas being born overseas. Of those, 31 have been sent back to China.