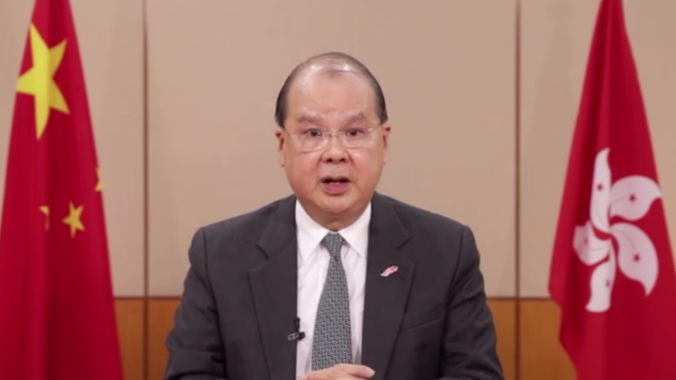 The Law of the People's Republic of China on Safeguarding National Security in the Hong Kong Special Administrative Region (HKSAR) has been effective in restoring stability so far, a senior HKSAR official said on Tuesday.

In a video message delivered to the 45th session of the UN Human Rights Council, Matthew Cheung Kin-chung, chief secretary for administration of the HKSAR, told the council that advocacies of "Hong Kong independence" and collusions with external forces have visibly subsided, as have acts of violence and blatant defiance of law and order.

"The law is vital in bringing Hong Kong back on track and safeguarding our country's sovereignty, security and development interests," he said.

The HKSAR official told the UN rights session that in implementing the law, the legitimate rights and freedoms of the Hong Kong people will be protected and respected.

"Our fundamental rights and freedoms remain intact under the Basic Law and the relevant provisions of international covenants as applied to Hong Kong," he said, adding that Hong Kong will continue to forge ahead as a vibrant, open and international financial and business center with a prosperous and stable future.

"The National Security Law is designed to bolster the successful 'One Country, Two Systems' which will continue to drive Hong Kong's progress. It seeks to preserve Hong Kong's core values including rights and freedoms, the rule of law and judicial independence," he noted.

Saying that almost all countries have their own national security laws, the official told the session that it is unthinkable that the law on safeguarding national security in the HKSAR should be a cause for concern for some countries.

"The international community should be fair and not adopt a double standard," he added.