In a move to clarify offenses that may breach the newly enacted national security law for the Hong Kong Special Administrative Region (HKSAR), a spokesperson with the HKSAR government said on Thursday that the slogan, "Liberate Hong Kong, Revolution of Our Time," has the implications of secessionism, alienating HKSAR from China, changing HKSAR's legal status or subverting the State power under the current circumstances. 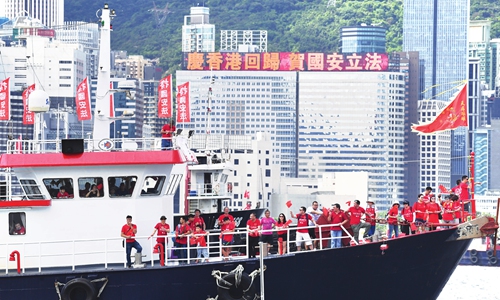 About 100 fishing boats in Hong Kong sail on Wednesday in Victoria Harbor to celebrate the 23rd anniversary of its return to the motherland and the first day of the enforcement of the National Security Law in the city. (Photo: cnsphoto)

The statement came after the Hong Kong Police Force (HKPF) announced Wednesday that around 370 illegal protesters were arrested on Wednesday, 10 of whom for allegedly violating the national security law for Hong Kong. Among those, several were arrested for showing materials with "Hong Kong Independence" slogans.

Some lawmakers, officials and legal experts consider some new measures that Hong Kong Police Force (HKPF) adopted "a good start" as police officers could take decisive legal action in ending riots and chaos that have ravaged the city since last June. With the law enforcement mechanism under the national security law, police force would be further strengthened.

As the new law specifically targets four types of activities that endanger national security - acts of secession, subversion of state power, terrorist activities and collusion with foreign or external forces to endanger national security - the HKPF used the new purple warning flag to warn protesters who display flags or banners or chant slogans in support of secession or subversion for the first time on Wednesday. With the new department set up under the HKPF, which is designed to work with other newly formed local and central authorities, the police force capacity is expected to be further enhanced in order to end "black terror" across the city as anti-government protests continue.

Some officers, wearing jackets with an "N", representing the new special unit under the Hong Kong Police Force to enforce law for national security cases, appeared in public for the first time on Wednesday.

Hong Kong secretary for security John Lee told the Global Times in an earlier interview that the law enforcement authority in Hong Kong would have more information sharing and cooperation with the central government's national security agencies in Hong Kong, and the HKPF will study the national security law, which would become "a reference of action."

"It's not changing law enforcement procedures for HKPF, but adding a greater legal basis to stop illegal activities," Joe Chan Cho-kwong, a former chairman of the Junior Police Officers' Association, told the Global Times on Thursday.

Before, the police acted on the Public Order Ordinance and the Offenses against the Person Ordinance, but are now facing more complicated situations in which rioters and secessionists are involved, Chan said.

The standards and dimensions of law enforcement have not changed under the new law. They would further boost police morale and make them more decisive in holding criminals, especially secessionists and rioters, accountable, he noted.

However, some opposition forces in Hong Kong, who have been smearing the new national security law, criticized the police arresting those with "pro-independence" banners as abuse of power, as some banners have not clearly shown their intention of "being secessionists."

Observers predicted that other appointments of officials, including the head of the new national security department of the HKPF and head of the specialized prosecution division of the Department of Justice would be announced before the weekend, while appointment of the head of the office for safeguarding national security of the central government in the HKSAR would also be soon announced, which shows that the law enforcemnet mechanism under the law would soon take shape.