Chinese mainland students must stay on high alert over Taiwan spies, mainland national security authorities warned after they recently revealed cases in which mainland students were incited to provide confidential information to the Taiwan "intelligence agencies."Mainland national security authorities told the Global Times that Taiwan "intelligence agencies" are offering money, faking close relations and making sexual temptations to people, including mainland students who study in Taiwan, as a means to incite defection.The fact that the Taiwan "intelligence agencies" are building a spy network among mainland students seriously damages national security and the national interest, and harms the overall peaceful development of cross-Straits relations, mainland authorities said.Real casesWhen Song Zhe (pseudonym), a mainland university student, was on an exchange program to Taiwan in March 2011, he was invited to a meal where he was approached by a woman from Taiwan, calling herself Hsu Chia-ying.Hsu asked Song about his university and major in the mainland, and expressed an abnormal fondness for Song, as he mentioned some advanced research projects of his faculty.Soon after, Hsu started inviting Song to bars and Karaokes frequently, intentionally making physical contact with Song in the process. She even tempted Song to sex during a trip together.Song became obsessed with Hsu and listened to whatever she had said to him.After Song returned to the mainland, he took part in a key national research project. Hsu continued to express her "love" to Song through email and WeChat, but also asked him to provide theses and reports on the project. It was at this point that Song doubted Hsu's identity.However, just as Song refused to provide further information to Hsu, she began to threaten him by sending anonymous mail to Song's teachers, friends and family members, saying that Song picked her up and tossed her out.Unable to handle the pressure, Song provided hundreds of research data related to national defense, and his future was buried when his act was spotted by mainland national security authorities.According to data released by mainland national security authorities, Hsu's real name was Hsu Li-ting, a spy who worked for Taiwan's "Military Intelligence Bureau.” She was born in 1977, much older than the 1993-born Song. 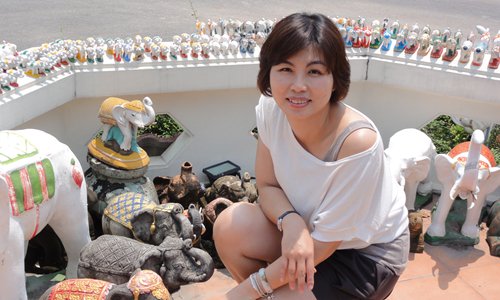 Sexual temptation is not the only way Taiwan spies try to get intelligence.Mainland student Zhu Hui (pseudonym) was about to write his thesis at a Taiwan university, but was having difficulty finding political figures in Taiwan to interview.At that point, Hsu Tzu-ching, who claimed to be a "legislator assistant" in Taiwan, approached Zhu and helped him contact multiple interviewees that he "never thought he could contact."Helped by Hsu Tzu-ching multiple times thereafter, Zhu invited his friend Ding Tao (pseudonym), who worked for the mainland government, to Taiwan for a visit on the request of Hsu Tzu-ching.During that visit to Taiwan, Hsu Tzu-ching took unusual care of Ding. Even after Ding returned to the mainland, Hsu Tzu-ching kept in touch with him and sent gifts to Ding.Hsu Tzu-ching told Ding that she was looking forward to the Taiwan reunification and was planning to open a company in the mainland. She asked Ding to give her confidential documents in order to get an upper hand in her business, and promised Ding shares in her company.Ding gave Hsu Tzu-ching five confidential files, for which he was sentenced to jail.Mainland national security authorities said that Hsu Tzu-ching, whose real name is Hsu Yun-yuen, was also a Taiwan "Military Intelligence Bureau" spy who was active in multiple universities in Taiwan, looking for her prey using different identities.

Getting help in a strange land is fortunate, but sometimes there are traps.Liu Feng (pseudonym), a mainland political science student, was approached by Chen Hsiao-Tzu when she went to Taiwan for a trip in 2012.Chen was very generous, picking up Liu and her friends at midnight at a local station in Tainan and treated them to Taiwan delicacies. "It seemed like he did not care about money. He did everything for us," Liu said.Liu realized something was wrong and cut ties with Chen after the latter asked Liu to help him take photos at a mainland aviation show.Chen, whose real name is Chen Tai-yu, was also a spy trying to incite mainland students to defect, according to data released by mainland national security authorities.

Main targetsA mainland national security official told the Global Times that mainland students who study political science, economics or national defense-related majors are more likely to be targeted by Taiwan spies.The spies expect the mainland students to take important positions in the future, so that they can gain access to confidential files of the mainland.The spies' requests might not involve confidentiality at first. But as they make more sensitive requests, they will threaten the students and force them to continue providing information, which are now confidential.The number of similar cases is increasing following Tsai Ing-wen's assumption to office, the official said, noting that the Taiwan spies are also targeting mainland students through the internet using chat applications, campus forums and recruitment websites.Mainland national security authorities will educate and save those students who plead guilty and repent, a staff member at the mainland national security authority told the Global Times.Students should never ignore any threat to national security, stay vigilant and refuse any "free lunch," he warned.