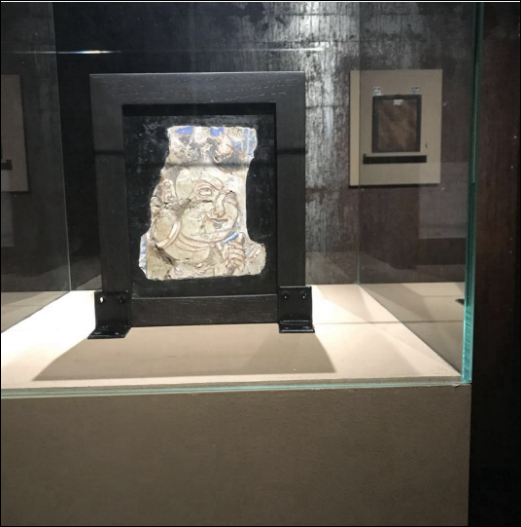 One of the three masterpieces: Mystery Figure with Five Hair Knots.(Photo: CGTN)

From July 14 to September 2 two exhibitions revolving around a singular theme, the Buddhist grottoes of Kizil, Xinjiang are presented at M WOODS in Beijing.

A program supported by the China National Arts Fund, Collected Reproductions of the Kizil Grottoes and Overseas Murals represents a culmination of twenty years of research led by Kucha Research Institute of Xinjiang.

The other exhibition shares three murals originating from the sacred caves of Kizil. The two exhibitions explore the beauty and originality of Kizil Grottoes that located at the ancient Silk Road.

The Kizil Grottoes are located on the northern bank of the Muzal river, in Baicheng County, Xinjiang Uygur Autonomous Region.

Known in China as one of the "Four Great Grottes" - a list including the Dunhuang Mogao Grottoes, the Yungang Grottoes, and the Longmen Grottoes, the Kizil Grottoes were registered as a UNESCO World Heritage Site in 2014.

In the late nineteenth and early twentieth centuries, archaeological expeditions to the historical Western Regions of China attracted many foreign explorers. These expeditions removed the different number of murals and painted status from Kizil Grottoes.

Currently, the majority of the overseas Kizil murals are in Germany, while the rest are scattered across institutions in Russia, France, Hungary, the United States, Japan and South Korea. Others belong to undocumented private collections or may be lost entirely.

Replicas of the Kizil Grottoes and Overseas Murals

By collaborating with other international institutions in possession of murals from the Kizil Grottoes, the Kucha Research Institute has led an initiative to digitize every piece and bring these into a central collection in Xinjiang.

The Kucha Research Institute of Xinjiang started research on the overseas collection of Kizil Grotto Murals in 1998.

After twenty years of efforts, the Institute has documented 465 pieces from different museums in the world. Parts of these digital images are showing at M WOODS this summer.

With the help of 3D digital scanning, researchers at the Institute have measured the murals and compared them with the pieces left in the original grottoes. Now many of their original locations have been identified.

The exhibition not only presents images of the overseas murals but also replicas of two caves belonging to the Kizil Grottoes.

The Return of National Treasures

As the only public institution in the Chinese mainland to own original fragments from Kizil Grottoes, M WOODS presents these three masterpieces in this exhibition.

The returned three masterpieces are Head of a Deity, Mystery Figure with Five Hair Knots and also Millennium Smile, which has significant meaning in Kizil Grotto research and cultural transmission.

One of the extraordinary pieces is Millennium Smile that depicts a royal family member from Ancient Kucha. Like Mona Lisa, a coy smile brightens her face, an enigmatic glance that has captivated viewers for over a millennium.

Details are shown on the mural point to a talented painter with ample knowledge of Buddhism. This marvelous piece still has the power to move people's hearts.

The original grottoes were sites for self-cultivation for monks.

"The creation and collection of art is yet another self-cultivation, and art is timeless. Collecting fragments from the Kizil Grottoes is also a kind of self-cultivation." Founder of M WOODS Lei Wanwan said.