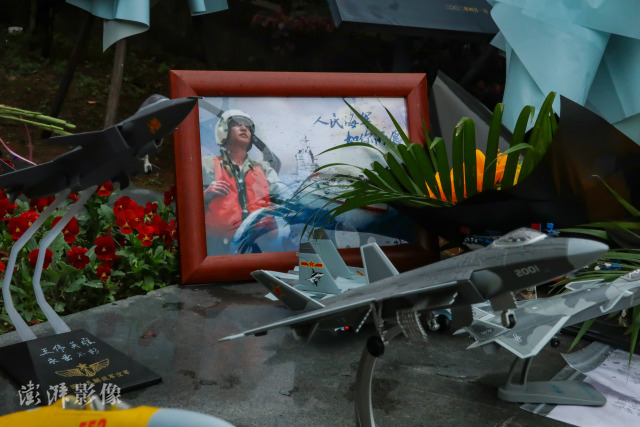 Flowers and other tributes have been placed at Wang Wei's grave at a cemetery in Hangzhou, Zhejiang province, on Thursday, the 20th anniversary of his death. (Photo: The paper)

The South Sea Fleet of the People's Liberation Army Navy said its naval and air forces are able, determined and ready to safeguard the nation's sovereignty, security and interests as it and people across the nation remembered a hero on Thursday.

The fleet published an article on its WeChat social media account to commemorate the 20th anniversary of the death of Wang Wei, a Chinese fighter jet pilot who was killed on April 1, 2001, in a collision with a United States spy plane near Hainan, China's southernmost island province.

"The best message we can send to the hero is that we will never allow such a tragedy to happen again," the article said."The Chinese Navy will never let history repeat itself."

The world will not be one in which the bigger fist has the bigger say, and the PLA Navy is always prepared to confront intruders and defend the country, it said.

The article compared China's military's hardware 20 years ago with that of today and displayed photos of the PLA Navy's current hardware, including an aircraft carrier, large destroyer, nuclear submarine and long-range bomber. It said that the date of Wang Wei's death will never be forgotten.

Every year on April 1, many Chinese people commemorate that sad day by posting words of remembrance and respect on internet forums and their social media accounts.

On Thursday, many Chinese media organizations published articles honoring Wang, saying that the PLA has become as strong as the Navy pilot had dreamed of. Some also posted a painting of Wang that depicted his wish of one day flying a fighter jet from an aircraft carrier.

In Hangzhou, Zhejiang province, flowers, paintings about Wang and scale models of China's latest combat planes and an aircraft carrier were placed in front of Wang's commemorative statue by local residents to show their respect.

Many netizens also posted on social media Wang's letter applying for membership in the Communist Party of China. In the letter, Wang said he was "willing to sacrifice everything, even his life, for the interests of the Party and the people".

Wang, who was born in April 1968 in Huzhou, Zhejiang, had wanted to become a PLA pilot since he was a young boy, family members said.

After spending five years at a flight college under the PLA Air Force, he was assigned to a fighter jet unit of the PLA Navy in July 1991 and given the rank of lieutenant junior grade.

On the morning of April 1, 2001, Wang, by then a lieutenant commander, and his wingman Zhao Yu were mobilized to monitor a US Navy EP-3E Aries II intelligence-gathering aircraft that had taken off from Kadena Air Base in Okinawa, Japan, and later flew into Chinese airspace over the South China Sea.

A PLA investigation found that the US plane had ignored warnings from the Chinese jets and made dangerous maneuvers, leading to a collision with Wang's fighter jet.

Wang was forced to eject from his seriously damaged jet.

The Chinese military conducted a large-scale 14-day search for the pilot in the South China Sea but failed to find him. Wang's body was never recovered, and he was presumed dead. He was only nine days away from his 33rd birthday.

Wang was proclaimed a revolutionary martyr and given the honorary title of "Guardian of Air and Sea".