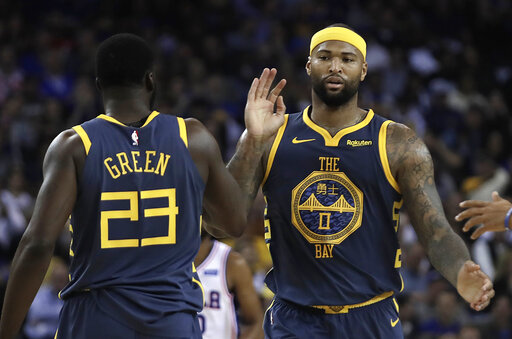 Golden State Warriors' DeMarcus Cousins, right, celebrates a score with Draymond Green (23) during an NBA basketball game against the Philadelphia 76ers in Oakland, California, US, on Jan. 31, 2019. (Photo: VCG)

During the game at the Oracle Arena in Oakland, California, the Warriors wore specially designed uniforms featuring elements of Chinese culture, such as the Chinese characters for "warrior."

Thursday night's game marked the seventh time and the fifth season the Warriors have worn their special Chinese Heritage uniforms since they started to do so in 2015.

The Warriors, one of China's favorite NBA basketball teams, was the first NBA team to ever wear Chinese New Year-themed uniforms, which is a nod to the strong Chinese culture in the San Francisco Bay Area, said the team in a statement.

The Chinese Heritage uniforms are very popular in gift shops at the arena.

Sammy Brown, a resident of the Bay Area, and his friends immediately put the shirts on after purchasing them.

"I think it's cool and different (from regular uniforms)," said Brown, though he did not know what the characters meant. But he knew it was part of the Chinese Lunar New Year celebrations, the most important festival for the Chinese.

As part of the Chinese Heritage celebrations, a traditional dragon dance and lion dance were performed during the halftime. Various giveaways throughout the night were also Chinese New Year-themed, including a Warriors Year of the Pig plush doll parachute drop, a red envelope giveaway and a Chinese New Year-themed mini-ball toss.

The Chinese Heritage celebrations are sponsored by Moutai, a famous Chinese grain liquor brand. The Warriors and Moutai will also partner to participate in the Chinese New Year Festival and Parade in San Francisco on Feb. 23.

In California, millions of people celebrate the Lunar New Year. Last year, the state designated the Lunar New Year a day of special cultural significance in an effort to recognize the rich history of one of the most celebrated events worldwide.