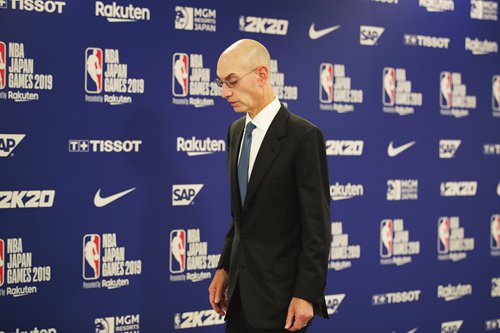 NBA Commissioner Adam Silver walks away from the podium after speaking at a news conference before an NBA preseason basketball game between the Houston Rockets and the Toronto Raptors, October 9, 2019, in Saitama, Japan. (Photos: IC)

The National Basketball Association (NBA) fan event scheduled on Wednesday night in Shanghai and a press conference were canceled as tensions between the NBA and Chinese society triggered by Houston Rockets general manager Daryl Morey's tweet in support of the Hong Kong riots escalated.

An NBA employee announced on Wednesday afternoon that the league canceled a press conference scheduled at 4:30pm in Shanghai, according to a Global Times reporter in a hotel where the conference was about to be held.

The press conference was originally expected to announce whether the NBA (preseason) games will be held as scheduled in Shanghai on Thursday.

Global Times on Wednesday found at the sports center for the fan event that smartphone maker Vivo appeared to have covered its name on a billboard on site to show that it has cut its ties with the American league.

The billboard of another sponsor, joint venture Dongfeng Nissan Passenger Vehicle Co., which was originally located in the sports center, had been removed, the reporter noticed.

According to a report by Chinese media outlet Titan24.com on Wednesday morning, Silver arrived in Shanghai overnight.

Morey might make a good politician but not a businessperson. He and the NBA didn't take the Chinese market and fans seriously and caused sadness to the Chinese. They need to face the consequences, a fan reached by the Global Times said.

Whether the preseason game in Shanghai between the Los Angeles Lakers and the Brooklyn Nets on Thursday in Shanghai would be held as scheduled remains unknown.

At least 11 of 25 NBA official partners in the Chinese mainland announced they would suspend cooperation with the league, according to media reports.

The national broadcaster also said all cooperation with the NBA should be reviewed.

More than a dozen Chinese celebrities, including the nine-member Chinese pop band Unine, actor Li Yifeng, and singer Fan Chengcheng, who is actress Fan Bingbing's younger brother, announced Tuesday that they would not attend the NBA fan event after Silver apparently backed Morey.

"We always adhere to the one-China principle, resolutely safeguard China's sovereignty and territorial integrity, and oppose any speech or act that attempts to split the country in any form," the celebrities wrote in their declaration.