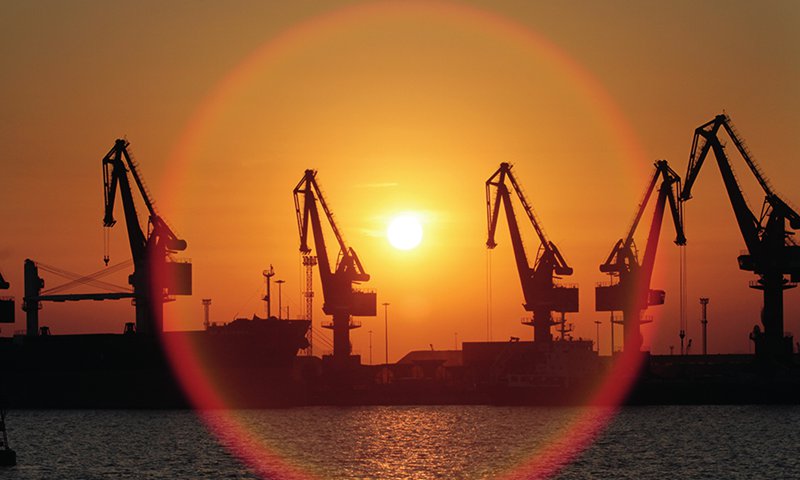 China's economy grew by 6.7 percent year-on-year in the second quarter, 0.1 percentage points lower than in the first quarter, data from the National Bureau of Statistics (NBS) showed on Monday. In the first half of 2018, the country's economy grew by 6.8 percent, NBS said. That was the 12th consecutive quarterly performance between 6.7 and 6.9 percent, and was well above the government's 6.5 percent annual growth target. During the first half of the year, medium and large industrial companies grew by 6.7 percent year-on-year. The service sector expanded by 7.6 percent, while fixed-asset investment grew by 6 percent, according to NBS.Trade row impactThe economic data comes as trade tensions rise between China and the US, the world's largest economy. NBS spokesperson Mao Shengyong told reporters that the impact of Sino-US trade tensions was limited during the first half of the year. "If there is any impact, it is relatively limited," Mao said. "We will monitor the situation in the second half of the year before reaching a conclusion."Cong Yi, an economics professor at the Tianjin University of Finance and Economics, said the limited impact from the China-US trade row proves China's successful economic transformation since 2013. "The contribution of exports to growth has been drastically reduced from over 60 percent to about 30 percent. Trade with countries and regions other than the US has been successfully implemented, and the importance of the US as a major export destination has been gradually reduced in the past years," Cong told the Global Times on Monday.Since domestic demand and new growth engines have spearheaded the growth momentum, the trade tensions have not had a major impact on China's economic growth, Cong said.Lian Ping, an economist at the Bank of Communications, said in a research note that the impact of US tariffs should not be overstated. The US has imposed tariffs on products from the EU, Canada, Mexico, India, Russia and China. When US consumers feel the weight of these tariffs, there will be pressure in the US on the Trump administration to change course.Flexible Chinese policies and the already depreciated yuan will also help China absorb the impact of the trade row, Lian said. Mao said the trade row unilaterally started by the US will have an impact on both economies, disrupt global supply chains, thus affecting global economic recovery and the continued growth of global trade. Second half pressureMao also said despite rising uncertainties overseas and the domestic economic transformation reaching a crucial stage, the nation's economy will continue to sustain stable and positive growth, with encouraging signs in consumption and investment. Mao said investment in manufacturing and real estate is expected to sustain growth in the second half of the year. The period will also see fast-tracked infrastructure projects. The growth in consumption is being led by rising household incomes, a structural shift toward consumption and increasing imports.Niu Li, director of the State Information Center's Macroeconomic Research Office, told the Global Times on Monday that the 6.8 percent growth rate is one of the fastest growth rates among major economies, and offers some room for adjustments in the second half, as the annual GDP target has been set at around 6.5 percent. "Besides the trade row, the slowdown in global economic growth, upheavals in Argentina and Venezuela, and domestic campaigns on deleveraging and phasing out outdated industrial capacity are also likely to put pressure on second half growth," Niu said.However, with help from stimulus measures, domestic demand will enjoy considerable room for growth, Niu said, provided that incomes continue to rise.Cong agrees, saying the domestic market has enough room to accommodate an upgrade in domestic industries and a structural transformation.  Liu Dongliang, a senior analyst at China Merchants Bank, told the Global Times in an email on Monday that further deleveraging may slow economic growth, prompting a discussion on implementing stabilizing measures.