China still needs to focus on prevention and control of the novel coronavirus pneumonia (NCP) due to numerous population movements during holiday return trips, an expert said on Sunday. 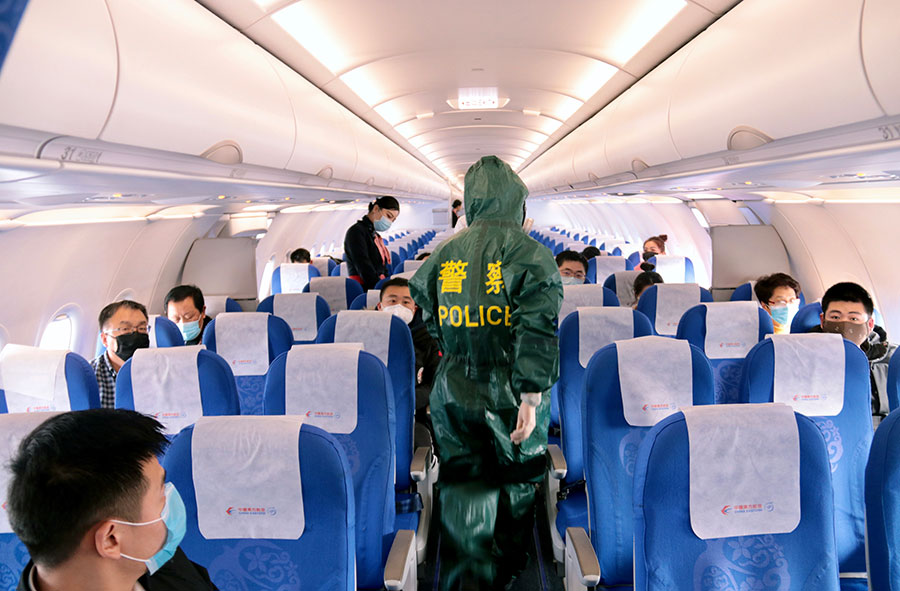 A police officer in protective gear is seen aboard a flight at Putuoshan Airport in Zhoushan, Zhejiang province, on Jan 28, 2020. (Photo: China Daily)

According to the National Health Commission, the daily confirmed cases of NCP reported in other provinces except Hubei has dropped from 890 on February 3 to 444 on February 9, with a 6 consecutive day decline.

Feng Kui, an expert on urban issues and researcher of the National Development and Reform Commission, has kept an eye on the plan for prevention and control in the next few weeks although the data shows a good trend.

Feng pointed out that central cities and urban agglomerations will continue to be key areas for joint prevention and control with the most intensive populations and economic activities.

“The population mobility has been greatly enhanced because the transportation infrastructure, especially high-speed railway, is well-developed,” Feng explained, “Population mobility is now about six times that from 17 years ago (during the SARS outbreaks), and the return passenger flow is coming after the Spring Festival holiday.”

Acknowledging that the shut-down of public transportation in Wuhan on January 23 is a must, Feng still calls on other cities to learn the lesson, stay vigilant and avoid a city-scale isolation in the future.

“I recommend that large and medium-sized cities have to do two previews,” Feng said, “one is the isolation response of small communities, and the other is the plan to build a centralized isolation point and treatment center before a large-scale outbreak of NCP.”

Feng also stressed the balance between NCP prevention and resumption of work after the holiday. Prevention and control should not be in doubt in epidemic-stricken areas, while areas with less severe epidemics could consider restoring production.

“At present, cities across the country should still focus on preventing and controlling NCP,” Feng said, “Besides, an assessment, prevention and control mechanism should be established that is jointly accepted by city regulatory departments, enterprises, and employees.”

To better respond to the epidemic in large cities in the future, Feng called on accelerating modernization of epidemic prevention power.

“I suggest that provinces, autonomous regions, municipalities, and large cities with a population of more than 5 million people should have the qualifications for publishing the epidemic and bear corresponding responsibilities,” said Feng.