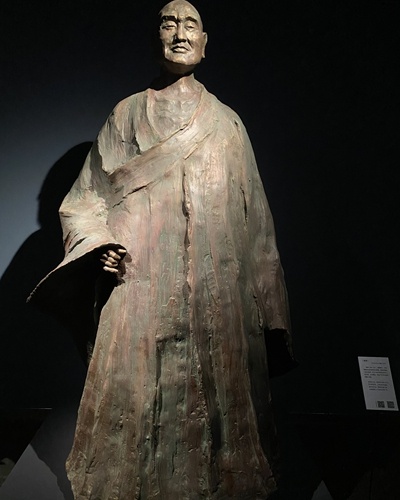 Sculpture of Monk Jianzhen on display at NCPA. (Photo: agencies)

A number of Chinese artist Wu Weishan's sculptures went on display at the National Centre for the Performing Arts (NCPA) on Saturday. The Sculpting the Spirit of Chinese Culture exhibition is showcasing more than 70 sculptures featuring Chinese historical figures in the eastern hall of the NCPA and its other public spaces.

Wu said that he seeks to interpret Chinese tradition through these historical figures, which include the philosophers Laozi and Confucius as well as poets Li Bai and Du Fu. Among them is a sculpture of Monk Jianzhen, or Ganjin in Japanese, who attempted to visit Japan six times and finally made it in 754. An important figure in China and Japan, Jianzhen helped propagate Buddhism in Japan and boosted friendship between the two nations. Wu said that the sculpture will soon visit Uneo Park in Tokyo as part of a modern cultural exchange.

Additionally, visitors will also find some dialogues between cultural figures of China and overseas in works such as On the Boat, which features Leonardo da Vinci and Chinese painter Qi Baishi meeting on a boat, and Door to Hearts, which features Ukraine poet Taras Shevchenko and Du Fu, one of China's greatest poets.

The exhibition will run until November 8.