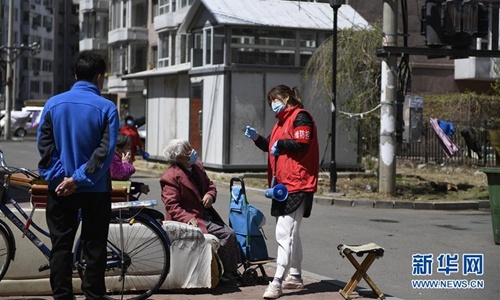 Jilin city in Northeast China's Jilin Province announced on Wednesday that it will close off all urban communities and villages, suspend all gatherings and halt all intercity train services as coronavirus cases rebound.

The city is facing pressure from a domestic rebound of COVID-19, after Shulan, which is under Jilin city's administration, reported six new infections on Tuesday, making it the only high-risk region in China. Jilin city has inspected the whole city for suspected COVID-19 cases. The infection chain has expanded to 22 people, 21 of whom are in Jilin, and one in Shenyang in neighboring Liaoning Province.

According to the city's official announcement via WeChat, 11 measures were taken to curb the spread of the virus, including suspension of all intercity trains and tourist buses, and monitoring all close contacts and overseas returnees from high-risk regions starting on Wednesday.

The city stipulated that pharmacies are not allowed to sell antipyretic, antiviral or antibiotic drugs. Clinics are forbidden to accept patients with a fever and must direct them to designated hospitals. Those who violate the regulations will be shut down.

All indoor entertainment venues that create opportunities for mass gatherings will be closed, such as cinemas, stadiums and internet cafes. Restaurants can remain open but no more than three to five people can sit at one table, and customers must be kept at least one meter apart.

Supervision over the wearing of masks and procedures for public disinfection will be strengthened, while supplies of masks and disinfectants as well as food will be ensured. Anyone who are caught profiteering will be seriously dealt with, said the government.

Moreover, a supervision team dispatched by the National Health Commission arrived in Shulan on Monday, working together with the local government on the prevention and treatment of COVID-19 patients and conducting an epidemiological investigation.

The city also announced it would suspend all schools that had already resumed classes as of Wednesday. Students will have to stay at home and take lessons online again.

Yang Zhanqiu, a deputy director of the pathogen biology department at Wuhan University, told the Global Times on Wednesday that the partial lockdown by Jilin city is a precautionary and effective way to contain the virus at an early stage.

Yang believes that the outbreak in Jilin city is unlikely to become uncontrollable because of strict measures and residents' cooperation. However, people should not take the situation lightly.

The source of infection in the city has not yet been disclosed. Jilin city officials said on Wednesday that another national expert team will arrive to the city to investigate infection sources.

A Jilin resident told the Global Times that he trusts and supports the government's decision. "We have  successful experience of curbing the virus in Wuhan and Suifenhe, where things were even worse. The temporary inconvenience and sacrifice will finally bring us to a safer future."

But such decisive methods will inevitably affect the pace of resuming work and production. Since it's likely people will have to live with the coronavirus over the long term, more anti-epidemic methods based on science and technology are needed, as well as development of vaccines and treatments, analysts said.

The Shulan government on Monday declared it was going into full-scale "wartime" control mode in response to clustered infections where 13 confirmed cases were reported. A citywide investigation of close contacts has traced 2,505 people, and 367 close contacts had been located and quarantined at designated sites as of Tuesday.

In response to the situation in Jilin, many regions have raised their alert levels to prevent the spread of the virus.

Changchun, capital of Jilin Province, stipulated that those returning from Shulan will face 14 days of centralized quarantine and seven days of home quarantine. They will be given nucleic acid tests four times before being discharged.

Dalian in nearby Liaoning Province on Monday asked its residents who had visited Shulan or been in contact with people from Shulan in the previous 14 days to report their status.