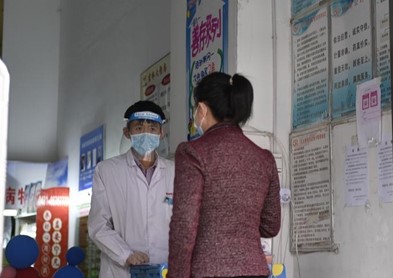 A woman purchases medicines at a pharmacy in Chuanying District of Jilin City, northeast China's Jilin Province, May 15, 2020. (Photo: Xinhua)

Besides the three new cases, one elderly patient who was confirmed to be infected with COVID-19 in Jilin died on Saturday due to cardiovascular and other diseases.

Local city and village residents are banned from leaving the city by principle, effective from Sunday, read the notice.

It regulates closed management at the local residential compound where neither visitors nor visiting vehicles are allowed to enter. Only one family member of each household is allowed to take a grocery shopping trip every day during fixed hours.

The notice also rules that local pharmacies and clinics should stop selling drugs including febrifuge, antiviral agent as well as antibiotic drugs, and all local clinics will be shut down temporarily.

Entertainment venues including movie theaters, gyms, and internet café as well as bathing pools in the city will be suspended from the operation, according to the notice.

Starting from Monday, all stores but the supermarket in Fengman district will be closed, the district's commercial affairs authority also said on Sunday.

Jilin Province detected no new imported COVID-19 cases, while two previous confirmed cases in Jilin city have recovered and were discharged from hospital on Saturday, according to the Jilin provincial health commission.

By the end of Saturday, the province had recorded a total of 19 confirmed cases from overseas, and 18 of them have recovered and were discharged from hospital, with the remaining one now undergoing quarantine and medical treatment. There were 307 people who had close contact with the imported cases, and 286 have been released from medical observation.

The province has recorded 125 locally transmitted confirmed COVID-19 cases with 28 still in hospital and under quarantine, and two deaths, by the end of Saturday. Two of the confirmed cases were in serious condition in the city of Jilin.

The province also detected one new asymptomatic patient in Changchun, capital of Jilin Province, bringing the provincial total of asymptomatic cases to 10, six of whom are imported cases.

Jilin city on Saturday removed six officials from their posts, including Li Pengfei, Party chief of Shulan, a city under the administration of Jilin city, and Liu Shijun, a deputy director of Jilin city's health commission.

The announcement came after a cluster of infections was reported in Shulan earlier in May that later led local officials to re-impose citywide epidemic control measures to prevent further spread of the virus.

Vice-Premier Sun Chunlan has rushed to the Jilin city, demanding strengthened efforts to plug loopholes in the COVID-19 response while preventing importation and the domestic resurgence of cases, media reported over the weekend.

Sun, also a member of the Political Bureau of the Communist Party of China's Central Committee, departed from the neighboring province of Heilongjiang to Jilin on Wednesday and has participated in a total of five conferences on four consecutive days since Wednesday. Sun also visited communities in Shulan and Fengman, as well as quarantine sites, hospitals, supermarkets, pharmacies and postal centers, Xinhua reported.

Observers noted that such high-ranking official's deployment to the frontline and local authorities' resolute actions reflect high prudence of the government when it comes to preventing epidemic rebound.

At a press conference on Sunday, Yang Limin, deputy secretary-general of the city's government said that the work of testing and detection work on key personnel related to the epidemic has concluded within three days.

According to Yang, nucleic acid samples of 40,101 people in the city have been submitted including those of 21,977 Hulan city residents.

The tracking on the source of the infection is still underway, he said.

The city has also been stepping up efforts to stock more epidemic control materials, as it has recently purchased 100,000 N95 masks,100,000 surgical masks, as well as 13,800 medical protection suits.

A total of 3,432 Party members and volunteers were also working round the clock to work at local communities and checkpoints to conduct epidemic prevention and control work.

Liu Qizhi, director of the Jinlin health commission. revealed at the Sunday press conference that eight supporting teams of more than 500 personnel from across the country including the national health commission steering group, have arrived at the city.

Shenyang, capital of Jilin Province's neighboring Liaoning Province, on Sunday also demanded that visitors to Shenyang from Jilin city since April 22, should go under a 21-day quarantine during which 3 times of nucleic acid tests will be given.

And those who are in home-isolation will be immediately transferred for centralized quarantine.

The Jilin health commission and Fengman district government have yet to comment on Global Times' inquiries on if the local authorities would establish makeshift hospitals in response to the epidemic situation.

An employee with the Jilin Ice Sports Center, a speed skating rink which was rumored to be undergoing preparations to be turned into a Fangcang makeshift hospital, told the Global Times on Sunday that the stadium is shut down at the moment while declining to confirm the arrangement.

The stadium is currently closed, which is normal during epidemics, the employee said, and she was not aware of any plan to transform the stadium into a makeshift hospital.