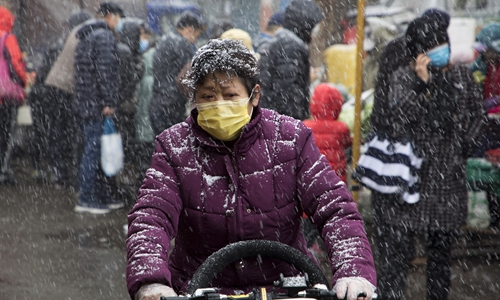 A woman wearing a face mask rides a bicycle in the snow in Jilin, Northeast China's Jilin Province on Tuesday. The spring snow surprised local residents while the larger areas of Northeast and North China are experiencing a cold wave. (Photo: IC)

The patient, a native of Jilin, departed from Moscow on April 9 and returned via the Manzhouli land border customs in North China's Inner Mongolia Autonomous Region. He was quarantined at a centralized facility in the border city until April 26 and his three nucleic and blood antibody tests in the time period were all negative.

The patient finished his centralized quarantine on April 26 and was sent back to Jilin Province on a designated vehicle to carry out further isolated medical observation. The fourth set of tests upon arrival in Jilin was both negative but tests on May 1 turned out to be positive.

The patient is now hospitalized for treatment and his 21 close contacts during the closed-loop transportation from the border city to Jilin are being quarantined for medical observation.

Beijing, the capital city, in mid-April also reported a confirmed imported patient who tested positive after finishing quarantine with multiple negative test results. Analysts have speculated that imported cases' virus genotype was different from what China had detected in January and February, and affected the accuracy of current test kits which were developed based on domestic virus genotypes.

The Chinese mainland has so far reported a total of 1,671 imported cases, with 464 still active.