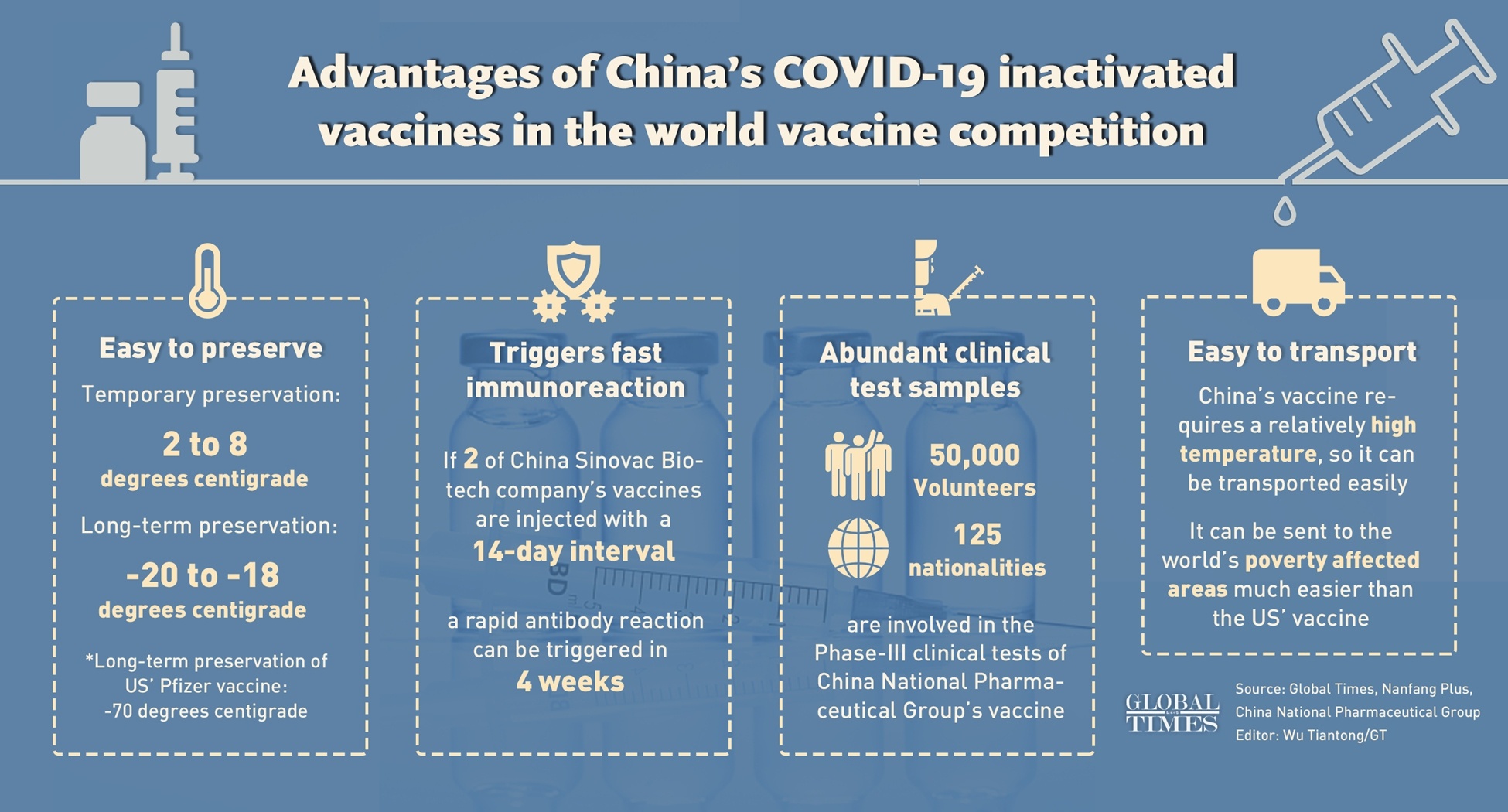 Chinese vaccine makers said that China's full-throttled development of COVID-19 vaccines remains in the lead among a roster of effective vaccines, although some Western media and politicians have questioned China for delays in releasing late-stage trial data after US drug makers Pfizer and Moderna's successes. The fact is, however, at least three out of five types of Chinese vaccines against the coronavirus have entered final stage trials, with the latest beginning phase-III trials in central China's Hunan Province on Thursday.

China's leading vaccine producer Sinopharm told the Global Times on Thursday that it has reported the phase-III clinical data to China's relevant regulators and is improving the data as requested. The vaccine maker, claiming it is in the final stage before marketing, stressed that it is not under pressure to reveal its vaccine data and will do so in a more scientific and controlled way.

The inactivated vaccines developed by Sinopharm are leading the world in all aspects such as research and development, clinical trials, and production and emergency use status, the head of Sinopharm Liu Jingzhen told the media on Wednesday.

Another leading inactivated vaccine producer, Sinovac, by contrast, has taken a more cautious tone, telling the Global Times on Thursday that it will not release the relevant data until it is assured to obtain enough number of qualified COVID-19 cases in its double-blind, placebo-controlled trials to certify vaccine effectiveness. The release is expected to be announced by the end of November.

US companies Moderna and Pfizer recently disclosed that their vaccines for the coronavirus are able to offer more than 90 percent efficacy, injecting confidence into the global anti-virus fight and raising public expectations on the data release of their Chinese competitors.

However, the speed of data acquisition is largely dependent on the severity of the epidemic situation in host countries and the enrollment schedule of volunteers in partnered institutions, according to analysts and industry insiders.

China has laid out five technical routes to develop the vaccine since the initial outbreak. Five Chinese vaccine candidates are under clinical trials in countries including the UAE, Brazil, Pakistan and Peru, and phase-I and II clinical trials of other candidates have been accelerated, Chinese Foreign Ministry Spokesperson Zhao Lijian briefed on Wednesday.

The producer is carrying out trials in countries including Uzbekistan, as some indicators in trials need to be obtained in other countries whereas others are best verified at home, the Global Times learnt from vaccine producer Anhui Zhifei Longcom Biopharmaceutical.

Sinopharm's two inactivated vaccines have been administered to nearly one million people for emergency use and no serious adverse reactions have been reported. Nearly 60,000 volunteers have participated in the phase-III clinical trials in more than 10 countries, Liu told media.

Many countries have pinned their hopes on Chinese-developed vaccines to stop the pandemic, and countries including Brazil, Turkey and Indonesia are importing Chinese vaccines currently.

Nevertheless, the World Health Organization's emergencies director warned on Wednesday that vaccines would not arrive in time to defeat the second wave of the COVID-19 pandemic. "It's at least four to six months before we have significant levels of vaccination going on anywhere," said the director. 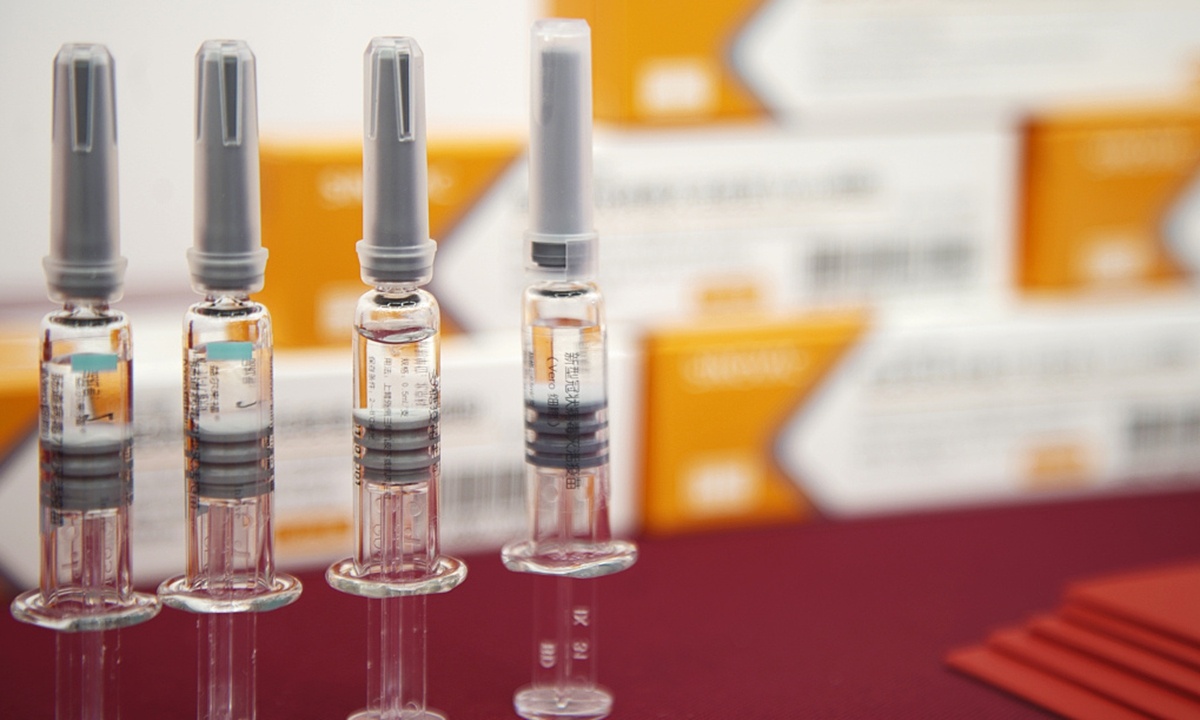 "Not releasing data does not represent slow progress. Our data is evaluated by relevant departments following strict protocols, and we are in close communication with the WHO," a representative of Sinopharm told the Global Times.

Notably, trial progress largely depends on the outbreak degree and trends in host countries. Given that COVID-19 has continued to surge in the US, it is faster and easier to find the required number of post-vaccination infections in their placebo group to quickly announce the protection rate, said analysts.

"Even if the data are available, it would take time for us to review its eligibility because China's approval authorities differ from the US' in terms of data identification standards," a source close to Sinovac told the Global Times.

"In addition, the progress of a host country's research teams in recruiting volunteers and inoculation arrangements also affects the pace of releasing results," the source said.

Experts disagreed that China experienced a setback after Pfizer and Moderna's recent good news. While Pfizer and Moderna are set to apply for emergency use with their midterm data, China approved the emergency use of domestic COVID-19 vaccines months ago and gave them to tens of thousands of people, showing positive efficacy, analysts said.

A Beijing-based immunologist told the Global Times on the condition of anonymity that he still holds a cautious attitude toward midterm results of Pfizer and Moderna.

The number of COVID-19 infections in the US has exceeded 11.5 million as of Thursday, accounting for about three percent of the US' population. But among the 15,000 members in the placebo group in Moderna's trial, only about 90 were infected.

The infection rate is just about one fiftieth of the US national rate, which means that there must be some factors that prevented infections among the placebo group, and that deserves further analysis, the immunologist explained.

Moreover, as the trials are conducted in summer, it still requires further observation to decide whether the vaccines can be as effective in winter when the virus' virulence is stronger, he noted.

The fact that no mRNA vaccine has been made available to large numbers of the public is also a factor that makes Chinese experts cautious over the safety and efficacy of Pfizer and Moderna's vaccines.

Unlike US companies that prefer to announce trial results via media, Chinese companies normally announce their results by releasing a thorough report in technical journals, Tao Lina, a Shanghai-based virus and immunology expert, told the Global Times.

Experts noted that financing needs may be a reason for the two companies rushing to release data that may be used to attract investment.

Pfizer Chairman and Chief Executive Officer Albert Bourla reportedly sold 62 percent of his stock holdings, or 1,32,508 shares, at $41.94 per share on the same day the company announced the results of its COVID-19 vaccine trial.

Gao Fu also warned of some remaining challenges and unknown issues that Pfizer and Moderna need to address, such as whether or not the antibody can reach one's lungs and how long it can last.