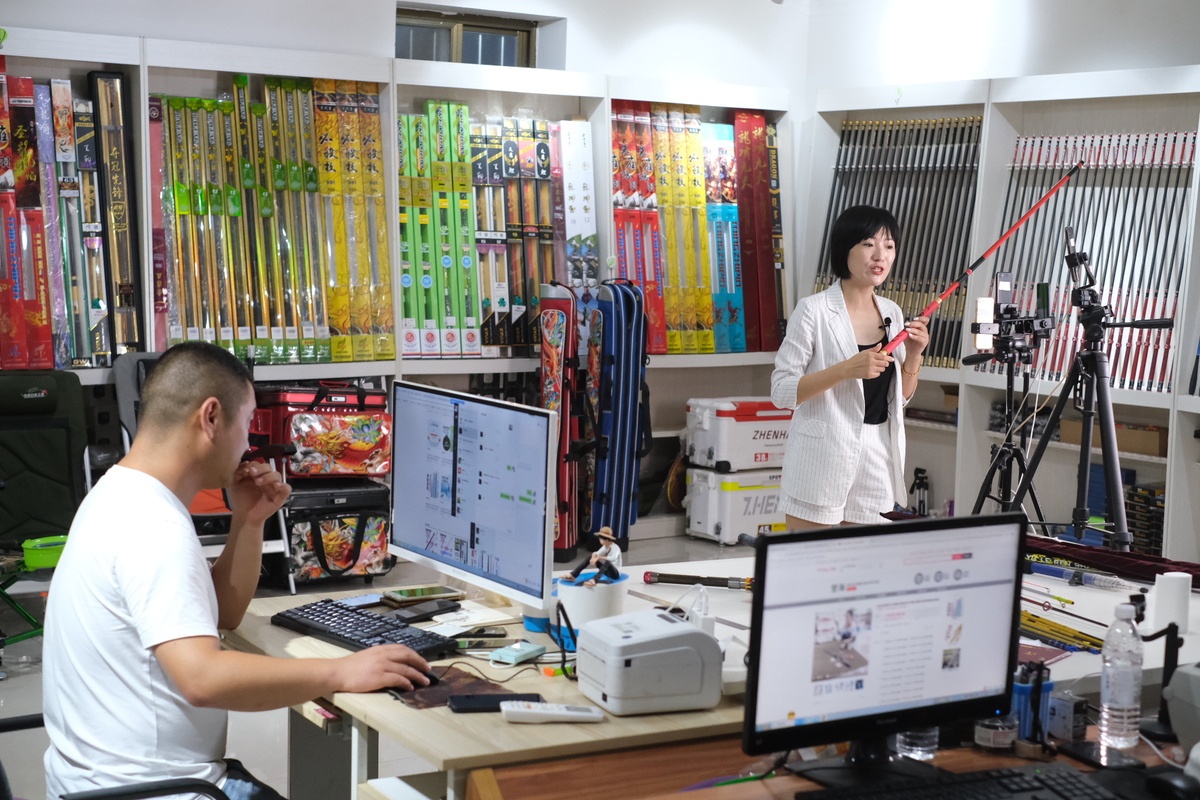 It all began with three "Taobao Villages" organized 11 years ago. Now there's 5,425 of them.

It's a significant achievement: To be designated a Taobao Village, a community must have more than 100 active online stores, or more than 10 percent of households participating. And it must generate sales of at least 10 million yuan ($1.46 million).

Xiqianbo, a small village in Suning county in Cangzhou, Hebei province, is a typical example. It became a Taobao Village in 2017.

Every day, more than 10,000 fishing rods are sold through more than 100 Taobao online shops in Xiqianbo. The business brings residents annual revenues of more than 60 million yuan.

Six years ago, it was nondescript－an ordinary northern village in which residents carved out a difficult living mainly by planting pear trees or doing outdoor labor.

When Chen Lei was elected as the village's Party secretary in 2014, he immediately turned his attention to helping residents prosper through e-commerce.

Chen and his son chose fishing rods as the core business and started the village's first online store on Taobao in 2012. Development was rapid.

Suning county began to develop a fishing tool industry in the 1990s, and it has become a major production and sales center for fishing tools. There are nearly 1,000 factories and more than 5,425 online stores as of June, according to the latest report of the Ali Research Institute of Alibaba Group. Around 10,000 people are involved in the industry.

With the source advantage, Chen's sales reached 50,000 yuan in the first month and 3 million yuan for the first year.

In 2013, he registered a trademark and began to customize products from cooperating factories. And in 2016, Chen established his own factory with a daily output of 1,500 fishing rods.

In the autumn of 2014, he set up a training course to guide villagers through the details of the e-commerce industry.

Over the next six months, Chen's son taught a four-hour lesson every week, attracting around 100 villagers. All the trainees started with the basics－photography, picture editing and how to open and operate an e-commerce store.

Residents were skeptical at first, but under the influence of Chen, they began to change their minds. In 2015, more than 60 people opened online stores on Taobao, and the number has increased year by year.

At the beginning of last year, Xiqianbo registered the first farmers' e-commerce cooperative in Hebei. In 2019, the annual per capita income of the village reached to 16,000 yuan, up from 8,000 yuan in 2014.

This year, Chen invested 3 million yuan to build an e-commerce center in the village. The main building, with an area of 1,000 square meters, has been finished. It's expected to become a platform providing residents with free training courses. It will display fishing tools and serve as a studio for making short videos and doing livestreaming broadcasts.

"I have confidence that the annual revenues will reach over 100 million yuan this year," Chen said.

China's Taobao Villages are distributed across 28 provinces, autonomous regions and municipalities. While most of them cluster in the eastern region, particularly in Zhejiang, Jiangsu and Guangdong provinces, they've started to spread to the midwestern and northeastern regions, going from 172 shops in 2019 to 341 so far this year.

Fusong, a county at the northwestern foot of Changbai Mountain in Jilin province, calls itself the "hometown of ginseng". Over the past few years, Wanliang, a township in Fusong, has developed logistics and promoted an intelligent internet platform to encourage farmers to sell ginseng online.

This year, Wanliang was organized as a Taobao Town, the first in Jilin province, and the town's Wanfu village joined the ranks of Taobao Villages.

Liu Xin, 30, from Wanfu, started his Taobao store with a friend in April 2017 after quitting his job as an electrical engineer from a ginseng pharmaceutical enterprise in Fusong.

"As early as my second year at the university, around 2012, I was trying online business," he said. "Cooperating with a friend who ran a Taobao store, I helped my parents sell their ginseng in my spare time."

During his years with the enterprise, he had the chance to gain more professional knowledge about the herb. And by the end of 2017, revenue from Liu's online business reached 5 million yuan. That number has tripled since the second year.

To help residents of his hometown have better life, Liu concluded an agreement with Wanfu village on directional procurement, bringing the village a 60,000 yuan profit every year.

"I hope to open more stores on different major e-commerce platforms, such as Suning and JD this year and make more contributions to my hometown," he said.