CHINA Neighbors urged to step up

Neighbors urged to step up 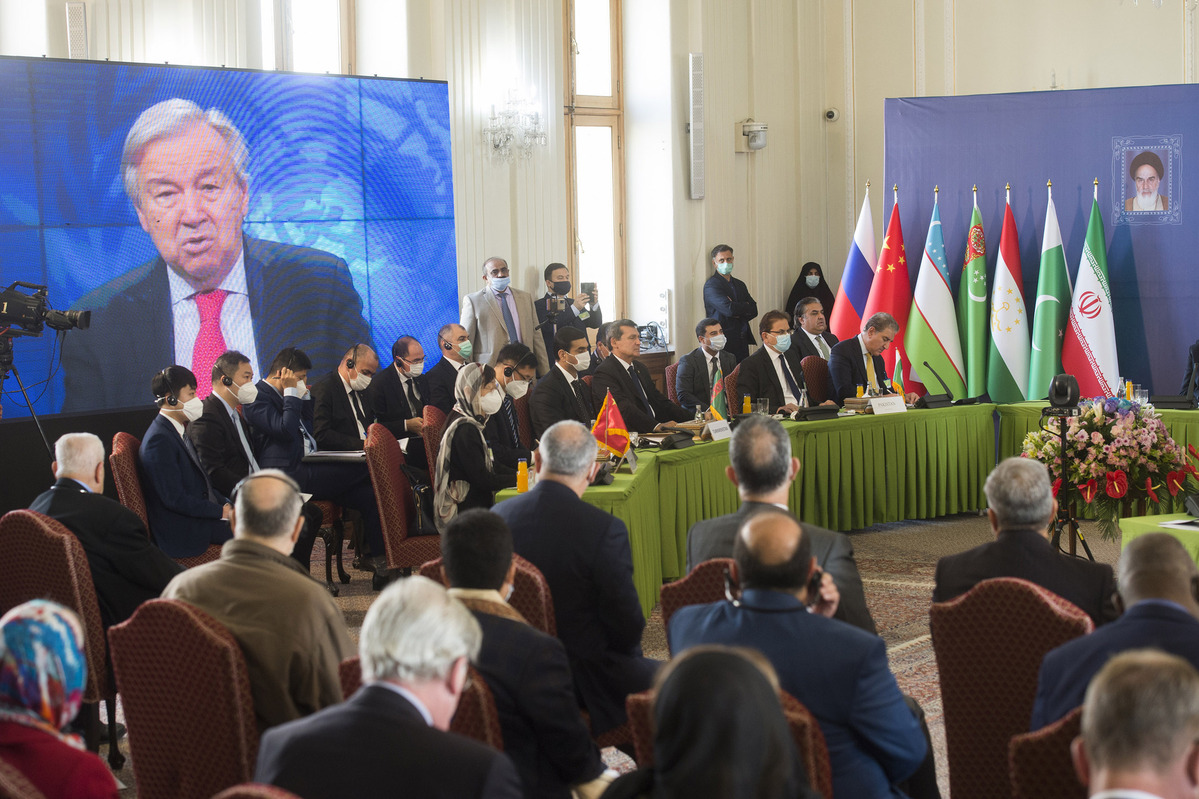 UN Secretary-General Antonio Guterres speaks via video during a meeting in Teheran of the foreign ministers of Afghanistan's neighboring countries on Wednesday. AHMAD MALEK/XINHUA

Beijing calls on nations in region to work together for Afghanistan

State Councilor and Foreign Minister Wang Yi has called on countries bordering Afghanistan to increase economic exchanges with the nation in order to help integrate it into the region's development, promote peace and boost reconstruction.

At the second meeting of the foreign ministers of Afghanistan's neighbors on Wednesday, Wang said via video link that the seven countries should take coordinated and robust actions to explore infrastructure connectivity and help Afghanistan take part in Belt and Road cooperation.

The World Bank and the International Monetary Fund also need to consider how to resume financing support to Afghanistan, with a view to help the country embark on a path of sound development, he said.

Wang urged the United States and other Western countries to lift unilateral sanctions on Afghanistan so that its state assets can be used to meet the people's urgent needs as soon as possible.

The second meeting, held among the foreign ministers of China, Russia, Iran, Uzbekistan, Tajikistan, Turkmenistan and Pakistan, came a day after a high-level engagement between Wang and a delegation of the interim Afghan government in Doha, Qatar.

According to a joint statement issued by the ministers, they called on the international community to further provide Afghanistan with urgent humanitarian assistance including food, medicines and needs for winter, in addition to help against COVID-19. The third meeting of the foreign ministers will be held in China in 2022.

At the ministers' first meeting in September, China announced 200 million yuan ($30.96 million) worth of emergency humanitarian assistance to Afghanistan.

The first batch of supplies has arrived at Kabul and the delivery of the remainder is well underway, Wang said, adding that China will continue to provide support to the Afghan people to the best of its capability.

Noting that Afghanistan is at a crucial stage of shifting from turbulence to order, Wang said that the country's neighbors should step up coordination and cooperation on Afghanistan-related issues in an attempt to replace chaos with stability. In doing so, their actions would prevent spillovers of security issues and help the nation embark on a path toward good governance, he said.

It is natural for neighbors to have some differences, but neither standoff nor confrontation provides a sustainable solution, said Wang, adding that the right way is to accommodate one another's reasonable concerns and seek coexistence in peace.

Wang stressed for the need to expand multilateral coordination on the Afghan issue, saying that China is ready to host the third meeting of the foreign ministers at an appropriate time. China also proposes the launch as soon as possible of the meeting mechanisms, namely the special envoys for the Afghan issue and representatives of embassies in Kabul.

He also called on the neighboring countries to encourage the new Afghan authority to make a clean break with terrorist forces, support it in combating all extremist and terrorist organizations including the East Turkestan Islamic Movement, and hold counterterrorism dialogue and cooperation with Afghanistan.