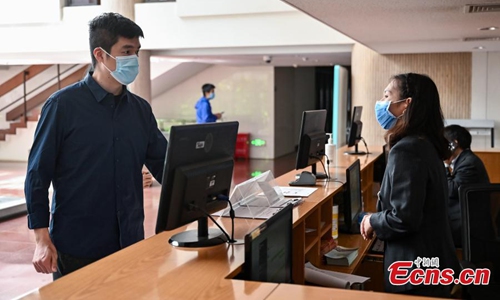 People are seen at The National Library of China in Beijing, May 12, 2020. (Photo: China News Service)

Discussion continues online after a Chinese college student apologized for making hateful comments against China on Twitter with netizens calling for schools to hand down punishments against students displaying such behavior and the strengthening of patriotic education on campus.
The student, named Ji Ziyue, first came to the attention of the public for his remarks reviling the victims of the Nanjing Massacre and calling China an offensive name, which sparked huge outrage on Sina Weibo. The University of the Chinese Academy of Sciences where Ji attends said on Saturday an investigation into the case is still underway.
Ji made an apology on Twitter on Saturday evening but was later found to have "liked" a few comments suggesting he was undergoing "political persecution".
Netizens slammed him for being two-faced and insisted that he receive tougher punishment such as a warning, suspension or expulsion from the school.
"He has to be held responsible for his behavior and needs to truly reflect on himself that his comments are not only absurd, but more importantly, hurts the feelings of the people in this country," commented a netizen.
In a survey conducted on Weibo asking people's opinions towards Ji after his apology, 98.5 percent of respondents believed that he should not be forgiven. A total of 208,000 people took the survey as of press time.
"It's all about his public remarks crossing the bottom line of a nation or even humanity, which is unacceptable anywhere," commented a Weibo user under the survey post.
Similar to Ji, another Twitter user who exposed his name in the post and claimed to be a student from Xiamen University in East China's Fujian Province, was also reportedly found to have insulted the Chinese people on Saturday.
The tweet was later denied by the student under the revealed name in an investigation launched by Xiamen University, according to a statement issued by the university on Sunday.
These two reports, along with several other recent cases of Chinese students making offensive and hateful remarks against China and Chinese people have prompted calls from the public for schools to impose proper punishments for those who display such behavior and also the  strengthening of education for students to improve respect towards their compatriots and enhance their sense of attachment to the country.
"Not too long ago, we had Xu Kexin smearing China's pandemic prevention work, and now we have Ji Ziyue reviling massacre victims… what we really need to do is correct and prevent such behavior through school punishment and education. After all, moral integrity, kindness and care for the country are the core values of the development of the younger generation," commented another netizen.