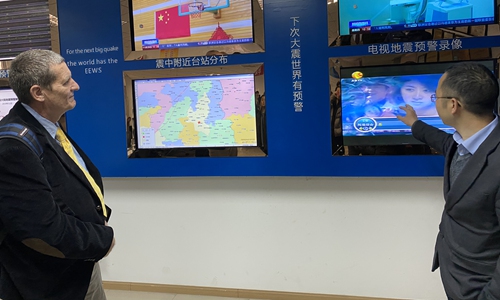 Chinese netizens hailed China's earthquake early warning technology for sending out alerts to the public seconds before the arrival of a 4.5 magnitude earthquake that struck Tangshan, North China's Hebei Province on Thursday morning.

According to the China Earthquake Networks Center, a 4.5-magnitude earthquake hit Fengnan district, Tangshan at 8:02 am. Strong tremors were felt in the adjacent regions, including Beijing and Tianjin, but no casualties have been reported. Tangshan is the city where a 7.8-magnitude earthquake in 1976 claimed the lives of more than 240,000 people.

But this time, the Earthquake Early Warning (EEW) System developed by Sichuan-based Institute of Care-life alerted Tangshan residents two seconds and nearby Tianjin residents 11 seconds before the arrival of the seismic waves, Wang Tun, head of the institute, told the Global Times on Thursday.

The hashtag "TV screen pops up alerts about Tangshan earthquake" has been viewed by more than 150 million netizens on Weibo as of press time, with many praising China's early warning system for sending out timely alerts that could save many people.

"Millions of thanks to China's earthquake early warning technology! Early warning even if only several seconds ahead could save millions of lives, and I wish such technology could continue to progress so that people have more time to prepare," one netizen said on Weibo.

The EEW system, the biggest earthquake early warning system in the world, covered 2.2 million square kilometers and over 600 million people in China, about 90 percent of the Chinese population that could be affected by the earthquake.

It was not the first time that the EEW system successfully sent out alerts to the public. The system provided residents in Southwest China's Sichuan Province life-saving seconds to escape from a 6.0-magnitude earthquake in July.

China has become the third country in the world, following Japan and Mexico, to provide EEW services to the public, Wang said.

The EEW system has provided services to countries along the routes of the Belt and Road Initiative such as Nepal and Indonesia, and it will reach more countries, including the Philippines, Myanmar and Pakistan next year, Wang said.